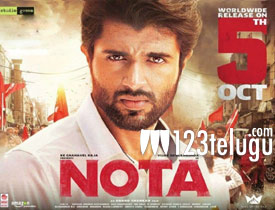 Happening star, Vijay Devarakonda is making his Tamil debut with the bilingual titled NOTA. The political thriller has hit the screens today and let’s see whether it meets the expectations or not.

Varun(Vijay Devarakonda) is a spoilt brat who is not interested in his corrupt father’s(Nasser) political life. To his shock, his dad makes him the CM of the state for a temporary period. Initially, Varun takes things on a silly note but a small incident changes his mind and he becomes committed to his job which is not liked by his dad. Rest of the story is as to how Varun fights his father and finally continues as the CM of the state.

Vijay Devarakonda is the biggest asset of the film as his sincere performance is the one which gives freshness to this routine political thriller. Vijay performs with ease as all his scenes as the CM have been executed well and the star hero looks and plays his part convincingly.

Political thrillers like these need to have a strong supporting cast and NOTA is spot on in that department. Nasser is top class as the cunning politician as his role has a lot of weight and he makes things interesting whenever he is on screen. Satyaraj plays his key role well and ably supports Vijay throughout the film.

The film has some realistic political scenarios featuring Tamil Nadu politics and they have been shown quite fearlessly. The entire political set up looks convincing as the characters have been kept real.

Vijay’s fans will be disappointed a bit as the needed elevation and heroism they expect from their star hero is missing in this film. The makers had a good scope to showcase Vijay in an even aggressive manner but lost out on that. Mehrene’s role looks out of place and is disappointing. The flashback’s of Nasser and Satyaraj do not add any weight to the film.

One more biggest disadvantage is the story. Looks like Vijay has okayed this story as it is his Tamil debut and gives him a good chance to do something new there. But such stories have been previously made in films like Leader and Bharath Ane Nenu.

There is nothing new that the film showcases as the political game and twists like these are quite old for Telugu audience. The second half is not that gripping and this is where the film goes down. The reason for which Vijay goes against his dad and he, deciding to fight corruption headon should have been showcased in a more effective manner.

Music by C S Sam is really disappointing but the background score was gripping. Production values by Studio Green are top notch as the political set up and richness of the CM and his surroundings have been showcased well by the cameraman. Editing is decent and so were the dialogues.

Coming to the director Anand Shankar, he has done just an okay job with the film. His inexperience of handling a political thriller is clearly seen as he could not make the narration engaging in the second half spite of having seasoned actors. He has showcased Vijay well and made his debut in Tamil impressive.

On the whole, NOTA is a routine political drama which the Telugu audience have seen many a time. Vijay Devarakonda leads from the front but the story and proceedings are predictable and do not support him much. However, this film will be a good launch pad for Vijay in Tamil and will be liked by the audience there as the flavor, sensibilities and satires are quite relatable. But for the Telugu audience this film ends as a below average fare and can be given a shot only to see Vijay in a new avatar.