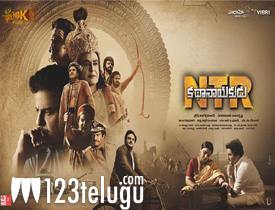 NTR Kathanayakudu is one of the most awaited biopics in the history of Telugu cinema. Based on the life of legendary NTR, the first part has hit the screens today amidst huge pre-release buzz. Let’s see whether the film lives up to all expectations or not.

The story of the first part is based on the life of Rama Rao(Balakrishna) who leaves his job and decides to become an actor. He is ably supported by his wife Tarakam(Vidya Balan) and very soon, Rama Rao makes it big and becomes a top star in the industry. But there is more life ahead for Rama Rao as destiny has other plans and makes him take the political route. How does he manage all of it and to know how much of it is showcased in the first part, one needs to watch the film on the big screen.

Probably, Balakrishna was destined to play his father on screen and boy, he has done just a mind-blowing job as NTR. You only feel as if you are seeing NTR himself on screen as NBK looks apt as the legendary actor in the second half. One can say that it is Balakrishna’s best performance to date as the star actor has lived in the role of NTR. Be it Balayya’s body language, or facial expression, he has got everything right and is a treat for all Nandamuri fans.

Many might have wondered why Vidya Balan opted to do a Telugu film. But she breathes life into the role of Basavatarakam. Vidya Balan proves why she is a national award-winning actress and gelled so well with Balayya and the manner in which she evokes chemistry with him is just superb. The emotions that she portrays through her silence speaks a thousand words and is the big pillar in the film.

Krish has selected characters in such a way that everyone is just class personified. Sumanth plays the mighty ANR and he is very good on screen. His onscreen chemistry with NTR and how those scenes are narrated by Krish is reminiscent of the good old days and Sumanth needs a special mention.

The way NTR’s rise an actor is showcased beautifully by Krish and Balakrishna relives all the iconic characters of NTR in a good way. The manner in which Kalyan Ram plays Hari Krishna looks neat.

All the special appearances are not handled properly as they just come and go in the proceedings. One of the basic drawbacks of the film is that is a bit slow. The proceedings take forever to reach to the actual twists or turns in the film.

There is no political angle in the first part and all those who think there would good drama will be disappointed.

What catches you right away is the manner in which the time frame is captured through the brilliant camerawork by Gnana Sekhar. He has showcased the different time frames in such a beautiful manner that you relive many of the memories yourself. What makes the camerawork even better is the superb production design. Be it the sets or the costumes or locations chosen, everything looks quite authentic on screen. Dialogues by Sai Madhav Burra and those written for Balayya are clap-worthy and stay in your minds even after you come out of the theaters.

Yet another unsung hero of the film is undoubtedly Keeravani who makes things magnanimous with his music. The way he has scored music keeping the royalness of NTR is too good. His background score elevates the proceedings completely. The styling done for each artist is remarkable.

Coming to the director Krish, he has done a pretty good job with the film. He has kept the first part totally to showcase NTR the actor and narrated what the legendary actor went through in each of his crucial phases in his life in a superb manner. The second half has good emotions and the manner in which NTR decides to join politics is established convincingly. However, if he would have added some entertainment quotient through the heroines and made the proceedings a bit crisp, things would have been even better.

NTR Kathanayakudu is a fitting tribute to the biggest actor to have graced Telugu screens. Balakrishna lives in the role of NTR and gives Nandamuri fans a reason to rejoice. Terrific performances, honest portrayal of NTR and a good build-up for the second part are huge assets. If you ignore the slightly slower pace, the film ends as a good watch for the fans but the general audience will find the biopic a decent watch.