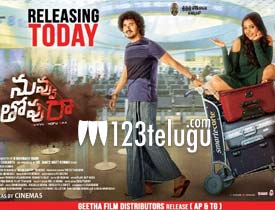 Life is beautiful fame, Sudhakar Komakula has been struggling to give a hit in his career. He has pinned all hopes on his new film Nuvvu Thopu Raa which has hit the screens today. Let’s see how it is.

Suri(Sudhakar Komakula) is a road side romeo who falls in love with Ramya(Nithya Shetty). Due to a small issue the couple break up and Ramya heads to the US. Left with unemployment and problems, Suri luckily gets a chance to go to the US. Rest of the story is as to what problems does Suri face in the US and how does he find his love back.

Hero Sudhakar is a pro with the Telangana slang and is a perfect fit as Saroor Nagar Suri. The entire story is based on him and he does a sincere job in the film. He is a talented actor and wish that he gets good roles in the future.

Heroine Nithya Shetty looks good and does well in her limited screen presence. Ravi Varma was impressive in a negative role. The suprise of the film is Varun Sandesh doing a supporting role. Though it was disappointing to see him play second fiddle, he elevates the proceedings with his screen presence.

The first half starts on a good note with decent emotions. Nirosha was apt as hero’s mother. Some scenes showcasing the US life style have been executed well.

The film has not been narrated well for the most part. A very good scene is followed by a series of bad scenes which keep spoiling the tempo of the film. Length is a big pain as the film takes for ever to get to the interval point.

Also, the climax is not handled well as things are wrapped up in a hurry. The problems faced by the hero and how gets into the drug mafia, all these scenes have been showcased a bit too much and this is where the film goes for a toss.

Heroine’s role looks forced in the second half and some scenes of hero looking for her would have made a lot of sense. Even the interval block is not executed well. An outsider getting into the drug mafia in the US and getting things done easily looks a bit over board.

Production values of the film are top notch. The makers have spent good money and have showcased the US setup well. The locations are very good and the camera work was really impressive. Music of the film is good but all the songs were wrongly placed. BGM was okay.

Coming to the director Harinath, his idea of showcasing a common man’s struggle to make it big in the US is good but his execution was quite disappointing. He starts the film well and once the film heads to the US he loses track. He shows glimpses of his talent through some good emotional scenes but his narration lacks direction and takes way too much time to come to the actual point and keeps on dragging without any direction.

On the whole Nuvvu Thopu Raa is a dragged out masala entertainer which lacks proper execution. Sudhakar Komakula leads from the front but he too cannot the save the film after a point as the narration is jaded and the proceedings are lenghty. Hurried up climax, aimless story make things even worse. Except for the film being set in the US and Varun Sandesh’s screen presence, this film has nothing interesting going it’s way. Watch it when it is aired on television.