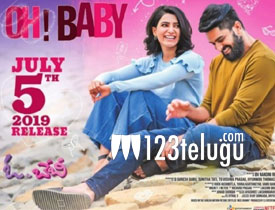 Samantha has been promoting her latest film Oh Baby on an aggressive note from quite some time now. The film has finally made its way to theaters today. Let’s see how it is.

Baby(Lakshmi) is a hyper old lady who runs a canteen on her own. Her dominating nature is not liked by her daughter in law. Because of a small family feud, Baby is kicked out of the house. But strange things happen in her life and Baby gets a wish to become this young lady and lead her life once again. Rest of the story is as to how the new and young Baby(Samantha) makes use of this opportunity and enjoys her life peacefully.

Even though the film is a remake, the manner in which Nandini Reddy has set the film in Telugu nativity is superb. She has excelled in her work and Oh Baby is Nandini’s best work to date.

It is very hard to put in words as to what Samantha has done with Oh Baby. She owns the film completely and takes you on a ride with her emotional, witty, and career-best performance. You will see Samantha the actress and not the star in the film. All her scenes with Rajendra Prasad and the climax with Rao Ramesh will bring tears to your eyes for sure. Be it her dressing to her comedy timing, Sam proves that she in top form in her career right now.

One cannot imagine the film without Rajendra Prasad. He is so good as Sam’s best friend and the senior actor shares superb chemistry with Samantha. His expressions are hilarious in the film. The first fifteen holds the key for the film and for this part to be set right, senior actor Lakshmi plays a major role with her experienced performance which sets the tempo nicely.

Naga Shourya looks handsome and is neat in his supporting role. Rao Ramesh gets an emotional role and the family values that are showcased through his role are just amazing and are a major plus to the film. Child actor turned hero, Teja does a good job in his first film. He gets a meaty role and impresses completely. Sunaina is very good as the nagging daughter of Rajendra Prasad.

Pragati is apt in her role and evokes good emotions. The first half of the film is packed well with hilarious comedy and sensible emotions. The climax has been executed well and the manner in which things are ended also looks complete.

The second half of the film is a tad slow and lenghty. The proceedings could have been trimmed to make things better.

The proceedings get a bit predictable in the second half as the tempo slows down and make things a bit dull here and there.

The production values of the film are top notch as the film looks rich in many areas. The film has a heartwarming feel and that is beautifully captured by the cameraman. Editing is just about okay as ten minutes could have been chopped off. Samantha has been styled superbly and so was Naga Shourya. Music by Mickey J Meyer is superb but his BGM was awesome.

Special credit should go to Chinmayi as her dubbing has given a special push to Sam’s performance. Coming to the director Nandini Reddy, she has done an amazing job with the film. The manner in which she showcased Samantha and narrated the film in an emotional manner with good values and clean entertainment is too good.

One the whole, Oh Baby is a heartwarming family drama which touches your heart completely. Beautiful emotions, good comedy, family values and romance, this film has it all. The film has a good connectivity factor which everyone can relate to easily. Samantha has upped her game to another level with this film and she will surely pull the crowds to the theaters with her career-best performance. Telugu cinema is truly churning out the best content oriented films in recent times and Oh Baby is one such film which should not be missed.