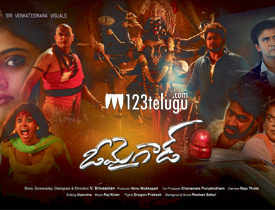 After a long gap, young hero Tanish has come forward with a horror comedy titled Oh My God. The film has hit the screens today and let’s see whether it gives a breather to Tanish’s career.

Aditya(Havish) is a young software engineer who lands in Hyderabad for his new job. Later that day, he joins the office and to his surprise, he finds out that there are only three employees in the company.

As time passes by, strange things keep happening to him through the rest of the employees. An upset Aditya, brings in a Tantrik and asks him to find out the actual reason behind all this.

Aditya gets the shock of his life when the tantrick reveals that all his co-employees are actually ghosts in real life and are seeking revenge on him. Who are these ghosts ? What do they have to do with Aditya ? and how does he escape from all this mess forms the rest of the story.

Certain scenes which showcase the interaction between Tanish and the heroine have been executed well. The horror scenes which have been shot on the office employees in the store room are good. Ashish Gandhi is pretty decent in his negative role.

Interval twist has been narrated in an impressive way. Certain thrills which have been showcased during the second half are good. Coming to the performances, Tanish has done a impressive job in his role. The way he has showcased certain emotions and carried off his comedy touch is also good.

Certain horror scenes during the first half deviate the mood of the film. They are below par and only increase the run time of the film and have also no connection with the main plot.

The narration of the film is confusing at times and deviates from the main story. Post the engaging interval bang, the film side tracks completely and makes it boring for the viewers. Pace of the film is also quite slow.

Camera work by Raju Thota is pretty impressive. His visuals are quite captivating and hold the film together. Music by Raj Kiran is just about ok and so was the background score. Editing is just average as many scenes during the second half should have been cropped.

Coming to the director Srivatsav, he has done a below average job with his direction. Even though his concept is good, he failed in executing it in a proper way. He tried to mix horror, comedy and thrill in one story but could not manage to pull it off with an engaging narration.

On the whole, Oh My God is only good in bits and pieces. Some horror comedy and a few thrills here and there are the only saving grace of this film. A dragged out narration and trying to mix too many genres in one story leave the film in no man’s land.