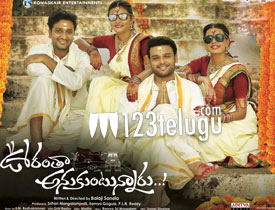 Naveen Vijay Krishna is back with his new film Oorantha Anukuntunnaru. The film was released today and let’s see how the film turns out to be.

Ramapuram is a very rich and prosperous village filled with lovely people. However, they have a weird custom that if a couple wants to get married, the entire village needs to approve of it. On the other hand, the elders in the village decide that Mahesh(Naveen Chandra) and Gauri(Megha Chowdary) should get married. But the twist here is that Mahesh falls in love with Maya(Sophiya) and Gauri falls in love with Siva(Sreenivasa Avasarala). How will this tricky situation get solved? Will Mahesh and Gauri be successful in love? To know that, you have to watch the film.

The family relations showcased in the film look good. Naveen Vijay Krishna was decent in his role. When compared to his previous film, he has improved a lot and is at more ease in front of the screen. Sreenivasa Avasarala is known for his comedy touch and he showcased it well in this film. Even in serious situations, he acted well with his Tamil dialogue delivery.

Megha Chowdary was good in her leading role and did well in all the emotional scenes. Sophia, the other heroine provided good glamour touch to the film. Rao Ramesh was at his usual best with his unique dialogue delivery. Jayasudha brought a lot of depth to the film. It was good to see Koata Sreeniva Rao in a good role after a long gap.

There are way too many scenes in the first half which are disconnected to the storyline. Even though some family emotions are good, they have been dragged a bit more after a point. There is forced comedy in the film which gets boring after a point. The romantic scenes also have no logic in them and irritate the audience at times.

The director has left the actual conflict point and has focused on unnecessary tracks that kill the runtime and bore the audience completely. Except for the climax, things get haywire in this family drama as the emotions do not create much impact. The characters do not have much depth in them and this is where the film goes for a toss.

Music by Radha Krishna was pretty disappointing as none of the songs clicked in the film. But his BGM was good. Editing is pathetic as many scenes could have been avoided. Production values of the film are top-notch and were ably supported by the rich camerawork. Coming to the director Balaji, he has done a disappointing job with the film. Even though he had rich content and conflict point, he sidetracked the film with his poor narration.

On the whole, Oorantha Anukuntunnaru is a boring and outdated family drama with forced emotions and dull narration. The basic conflict point is not elevated making things boring for the audience. Except for the climax, this film has nothing much to offer and can be left alone this week.