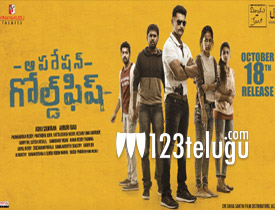 Operation Gold Fish is one film that has created a decent buzz all over. The patriotic drama has hit the screens today and let’s see how it is.

Ghazi Baba(Abburi Ravi) is a dreaded terrorist who starts killing Kashmiri Pundits and keeps asking them to leave the place. Arjun’s(Aadi Sai Kumar) parents are one among those who get killed. Due to this, Arjun develops hatred towards Ghazi Baba and trains to become an NSG commando. He fights hard and even captures Ghazi Baba. But Ghazi Baba’s gang headed by Farooq(Manoj Nandan) targets a minister’s(Rao Ramesh) daughter to save Ghazi Baba. The rest of the story is as to how Arjun fights hard and ends this terrorist mission of Ghazi Baba.

Anil Kuruvilla is getting decent roles and once again does a good job in his role. Writer Abburi Ravi as Ghazi Baba was also neat in his role. For a first-timer, he did well in his complex role. Nithya Naresh, Sasha Chetri, Krishnudu and the rest of the cast did well in their limited roles.

The manner in which the sensitive issues of Kashmir and its people have been showcased looks good. How the Indian soldiers are suffering by sacrificing their lives was also showcased well in the film.

The second half is where the film goes down. The screenplay goes for a toss and there are so many unnecessary scenes which are thrown it which derail the film. The twists that come during this time are also not that impressive.

The film defies logic in several areas. Manoj Nandan and his team come from Pakistan and go about their activities in a very easy manner. The way they operate and kidnap the minister’s daughter and operate in Vizag, all these things look over the top.

The manner in which the terrorists free Ghazi Baba has been stretched too much and eats away a lot of runtime. The love story showcased also does not have much depth in the film and gets messed up.

The camerawork in the film needs a special mention as it showcases the fights and thrills in a superb manner. The color tone of the film is also very good. Music was decent and the song that comes in the pre-climax of the film is pretty good. The patriotic dialogues written suits the nature of the film. Production values were just about okay.

Coming to the director Sai Kiran Adivi, he has done just an okay job with the film. His concept is good on paper but his execution is just about okay. His screenplay is not that engaging and he wasted a lot of time adding way too many things which derail the film.

On the whole, Operation Gold Fish is a passable patriotic drama which has a select few good moments. The setup is good but a disappointing screenplay and unnecessary scenes take away the grip from the proceedings. All those who like action-based films with patriotic feel can give this film a shot and the rest can take it easy.