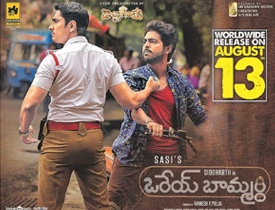 Continuing the trend of reviewing low-budget films, today’s pick is Orey Baammardhi starring Siddharth. The film is out now and let’s see how it is.

Rajasekhar(Siddharth) is sincere traffic police who catches a bike racer named Madan(GV Prakash) for breaking several rules in the city. He also insults him big time and hands over them to the cops. But in a tragic turnaround of events, Raksekhar gets married to Madan’s sister. This does not go well with Madan and he tries to spoil his sister’s marriage. Will he be able to do it is the basic story.

The basic concept and backdrop of the film are pretty interesting. Siddharth is seen as a traffic cop and he impresses big time. In a serious role, Sid brings a lot of freshness and variety to his character.

GV Prakash as the rash bike racer was also very good. He even dominates Siddharth in many scenes. All the scenes featuring GV Prakash and his sister are pretty good. The confrontation scenes between Sid and GV Prakash have been designed quite well.

The film picks up quite well before the interval and sets up for a good second half. But that does not happen as the second half becomes quite boring. The emotions do not create that kind of an impact and are quite routine.

The confrontation scenes between the two heroes are quite good in the first half but that does not happen in the latter part. The logic goes for a toss and this derails the good story. The sister’s role is quite key but the director has sidelined her for no reason.

The production values of the film are pretty good and so was the camerawork. The Telugu dubbing is pretty good but the editing was disappointing. Coming to the director Sasi, he has written a good concept but did not elevate it well at all.

On the whole, Orey Baammardhi is a film with a very interesting premise. The pre-interval and interval blocks are good and Siddharth’s acting stands out. But a boring second half spoils the fun and derails the film making it routine and boring.