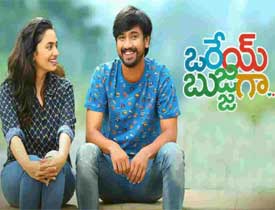 So, continuing the series of reviewing movies and shows during the lockdown period, our today’s pick is the Telugu film Orey Bujjiga. The film has skipped its theatrical release and is out on AHA. Let’s see how it is.

The film starts in Nidudavolu as Bujji’s(Raj Tharun) parents fix a match for him. Upset with this, he leaves his town. During the same time, Krishnaveni(Malavika Nair) also runs away to Hyderabad for the same reason. But the entire town feels that Bujji has eloped with Krishnaveni. When Krishnaveni comes to know this, she is upset big time with Bujji. The twist in the tale arises when Krishnaveni gets to meet Bujji as Seenu. Love blossoms between them and one fine day, Bujji comes to know that Krishnaveni is the girl who has run away from her town and hates him. The rest of the story is as to how Bujji sets things right and wins his love.

One of the biggest plus points of the film is Malavika Nair. It is so good to see her after a long time and she looks so cute in her role. Be it her natural look or the way she performs in all her scenes, Malavika is adorable. Raj Tharun is also good in his role. Doing situational comedy is a cakewalk for him and he does well in the film.

The interval bang and twenty minutes post the break is quite good and has neat fun. The comedy works during this time and the scenes also flow in a neat manner. Madhu is good in his role and Satya creates a few laughs here and there. Posani is at his usual best.

The comedy generated through the mistaken identity looks good at a point but is overdone. Naresh is neat in his supporting role and Raj Tharun and Malavika’s chemistry is quite good.

The story is routine and old. Though it looks good on paper, it is exaggerated a lot. The story clearly ends when Bujji gives back the heroine to her parents and things become so good for Krishnaveni. The director could have ended the suspense there and cleared the confusion. But the film is dragged for no reason and things become boring.

The situation goes out of hand with a hospital scene featuring Saptagiri and this tests your patience to another level. So much was said about Vani Vishwanath and her comeback but she is there hardly for a few scenes. Hebah Patel is shown in a cheap manner and she should stop doing these silly roles which have no substance and spoil her name.

This could have been an easy two-hour film but the director drags it for no reason and the last half an hour is just a waste of time. Also, the songs are a big disturbance and have also been shot in a cheap manner.

The production values of the film are good as the camerawork is neat. Dialogues are good and evoke decent humor. Editing is pathetic. The music is boring and so was the background score. Coming to the director Vijay Kumar Konda, though his story is old, he sets up things nicely. His point of mistaken identity and the fun generated looks good. But he deviates the film so many times with unwanted scenes and boring subplots that irritate the audience.

On the whole, Orey Bujjiga is a film that is clearly made for the single screen B and C center audience. Though the story is simple and has nothing new, humor keeps the audience engaged here and there. If you are bored with the serious web dramas and films that are being made on OTT, give this film a shot but be prepared for the over the top comedy that will be thrown your way.