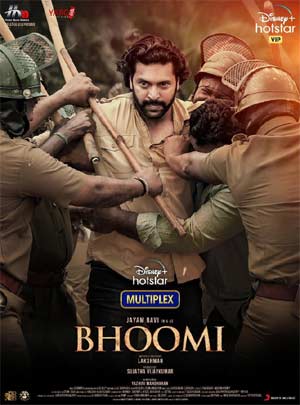 So, continuing the series of reviewing movies and shows on OTT, our today’s pick is the Tamil film Bhoomi, the latest Tamil film on Disney Hotstar. Let’s now see how it is.

Bhoominathan(Jayam Ravi) is a NASA scientist who is all set to go on a big mission to Mars. As he will be occupied for the next few years with his work, he decides to come back to his native place and spend some time. He comes down and falls in love with Shakthi(Niddhi Agerwal). But this is also the time, he faces issues in the village and also sees the plight of the farmers. So, Bhoomi leaves his job and decides to stick to his roots and give agriculture a big push with his vast knowledge. How will he do that forms the rest of the story?

Nidhi Aggerwal makes a good debut with this film. She looks pretty in her village belle look and does well in her role. Jayam Ravi tries hard to make things work and is good only in a few scenes. After a while, he mostly looks disinterested in the film. Radha Ravi is neat in his role.

Hindi actor, Ronit Roy is impressive in his negative act. The emotional scenes of the farmers and how they suffer are shown well. The village visuals and earthy dialogues are good. Some emotional family scenes have been showcased nicely. The editing is good and the camera work is impressive. The songs are also shot in a colorful manner.

Without a doubt, the film is a free make of Shahrukh Khan’s Swades. The subject is almost the same and the only difference is that the hero work towards reviving agriculture. Jayam Ravi’s character looks way over the top. He does things so easily that he has no obstacles in any which manner.

The film has traces of Maharshi, Srimanthudu, and many more social Tamil films in the past. The motive of the film is clearly explained from the word go and there is no excitement in the narration. The villain’s character played by Ronit Roy is stereotypical.

There is way too much melodrama in the film and this can bore you completely. Nidhi Aggarwal has nothing much to do. As long as you keep watching the film, the only thing that strikes you is that you have watched this scene earlier in previous films.

On the whole, Bhoomi is a social drama that is over the top and loud. The film is a rehashed version of Swades, Srimanthudu, Maharshi, and several other films. Drama is dragged, emotions are fake and dull performances make this film a boring watch this Pongal season.