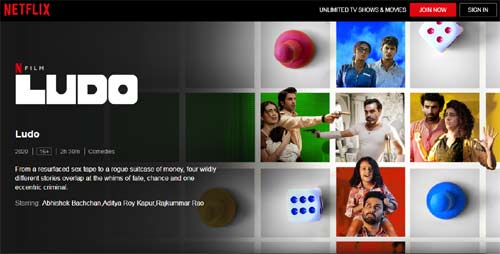 So, continuing the series of reviewing OTT shows and films, our today’s pick is the Hindi film Ludo. The film is available on Netflix and let’s see how it is.

Sattu Bhaiyya(Pankaj Tripathi) is a dreaded gangster who kills a builder and hell breaks out loose. Four different characters with names Bittu Tiwari(Abhishek Bachchan) Akash(Aditya Roy Kapur) Aalu(Rajkummar Rao)and Shruti (Sanya Malhotra) get entangled in this murder without their knowledge. How one murder changes things for these characters forms the story of Ludo.

With each passing film, Pankaj Tripathi is getting solid roles and he is the best part in Ludo as well. He has the best role and delivers a solid performance. His expressions and comedy timing in a few scenes are to die for. Next in line is Rajkumar Rao who is superb. His take on Mithun Chakraborthy in all his dialogues and the fun factor he brings was amazing.

Aditya Roy is just about okay in his role and plays his part well. Abhishek Bachchan is also neat but he is getting repetitive in his roles. Sanya Malhotra looks beautiful and is good in her small role. The backstories and characters of each of the actors are nicely written and have been set up well in the plot.

The dialogues are amazing and evoke witty humor. The production design and camerawork are good. But the BGM was even better. The humor angle in the film is good and makes the dull scenes active.

Though the backstories are written well, director Anurag Basu takes a lot of time to establish them. Because of this, the length of the film becomes long and some parts drag for no reason. The screenplay is a bit wayward as many things happen in the pot and the normal audience can get confused a bit with what is happening in the plot. The film has way too many characters and it is hard to keep track of some in crucial scenes.

On the whole, Ludo is a film that has a very interesting backdrop. The film is filled with noted Bollywood stars and the performances they give and their weird characters make things interesting. If you ignore the length and slightly complex narration, this film ends up as a decent watch.