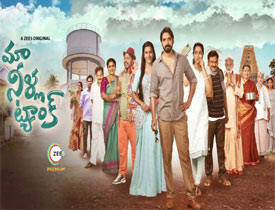 Akkineni hero Sushanth is making his OTT debut with Maa Neella Tank directed by Lakhsmi Sowjanya of Varudu Kavalenu fame. The show is released on ZEE5. Let’s see how it is.

Gopal (Sudharshan) thinks of marrying Surekha (Priya Anand) at the suggestion of Surekha’s friend. Surekha, who doesn’t like this marriage, leaves the village. Due to this Gopal gets onto the village water tank and threatens to commit suicide if Surekha doesn’t return. Kodandam (Prem Sagar) who is the Sarpanch as well as the father of Gopal asks Vamsi (Sushanth) the cop, to bring her back. Vamsi takes up the job in anticipation of his transfer. Gopal blames his father for the disappearance of Surekha. Kodandam makes a promise to his son in front of the entire village that he will do the marriage of Gopal and Surekha and also assures everyone of repairing the water tank. Did Vamsi bring Surekha? Did Sarpanch keep up his word? Did Gopal marry Surekha? This forms part of the rest of the show.

The humor is the biggest plus in this series. There are a good number of sequences that have an ample amount of comedy that evokes laughs. Sushanth is good in his role. He played the role of an irritated cop very well and conveyed the emotions present in the role in a very effective way.

Priya Anand got a role that has more depth and her performance as an independent woman is very fine. The surprise package is Sudarshan. He got a meaty role in the series and he performed it to the best of his capabilities. His comedy timing is simply phenomenal. Other artists like Divi, Annapurnamma, Prema Sagar, and RamaRaj were decent in their roles.

The main drawback of the series is its writing. The series is inconsistent and it doesn’t have a proper connection with each episode. The main motive of the series isn’t portrayed clearly. Even though the backdrop is established well initially, it loses steam as things proceed forward.

The pace of the series is one more drawback as it feels stretched out. The climax is not that great and it feels unconvincing. The love track between the lead pair isn’t well showcased. All the lead characters just have a single motive from their end throughout the show and this adds to the redundancy.

Though the actors performed well the confused narrative doesn’t connect the inconsistent sequences with the improper flow and ends abruptly. The editor could have shortened the episodes which could have made the drama more engaging. Annapoornamma is under-utilized whose character has more weight in the climax.

The music department did a fair job. The background score is good and it fits the narrative. The cinematography by Aravind Vishwanath is simply brilliant, Makers have spent well and that is clearly visible in the production values.

Coming to the director Lakshmi Sowjanya, she has a well-written script that had a lot of scope for drama on paper, but the narrative was half-baked. The show has its moments but it fizzles away with mid-episodes.

On the whole Ma Neella Tank is a half-baked village drama that starts off quite well and ends on a disappointing note. The show absolutely has a good premise with fine performances from the actors but it feels dragged with a lack of clarity in narration. If you like watching village comedy dramas you can give it a shot but with fewer expectations.