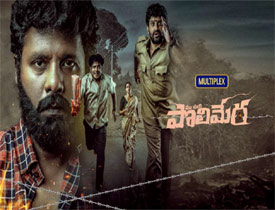 Maa Oori Polimera is the latest direct to OTT outing from Tollywood. The film has Satyam Rajesh in the lead role and it is billed to be a rustic drama. Here is our review of the film.

Komarayya, Balji, and Jangayya are brothers who reside in a rural area in Telangana. Their lives take a turn for the worst after the sudden passing away of their village’s sarpanch. What is the mystery behind the death of the sarpanch? How does it ll affect the lives of the aforementioned individuals and their families?

The rustic setup that plays an integral role in the narrative has been presented well. The atmospherics add to the essence of the film. The murder mystery plot has moments of brilliance. The twists in the tale keep the audience hooked to an extent.

The film is powered by fine performances from the lead cast. Satyam Rajesh delivers a superb performance in the central role. The background score is riveting and it maintains the momentum of the proceedings on screen. The film is technically sleek.

The film gets off to a rather poor start. The scenes pertaining to the establishment of oppression of women in the village don’t make for a good viewing to the family audiences. Also, the screenplay is patchy. Almost every gripping scene is followed by a bland set of sequences.

Maa Oori Polimera, to an extent deals with the concept of black magic and it doesn’t necessarily strike a chord with all sections of the audience. It caters only to a selected section of OTT audience.

The director Anil Viswanath picks a raw and rustic subject and he gets it right as far as the murder mystery goes. He narrates the thrilling sequences with good conviction. But the drama surrounding the same is not upto the mark. A handful of bland sequences dampen the screenplay every now and again. The cinematography and background score are of very good quality. The runtime is crisp.

Maa Oori Polimera is a mixed bag. It has its moment of brilliance when it comes to the murder mystery plot. But the drama isn’t sustained through the course of the film. It doesn’t make for a good viewership for the family audience, owing to the adult content. But if you like realistic drama, you might give it a try.