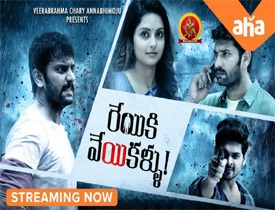 Reyiki Veyi Kallu, the Telugu-dubbed version of Iravukku Aayiram Kangal (2018), released on Aha Video. Let’s see how the movie is.

Bharat (Arulnithi Stalin) is a cab driver who is in love with a staff nurse Susheela (Mahima Nambiar). One night, Ganesh (Ajmal) saves Susheela and takes it as an advantage. He starts harassing her and in the meantime, she comes to know that her client, Sobhana (Chaya Singh) is also harassed by Ganesh. Bharat decides to put an end to Ganesh’s activities. He goes to his residence and finds a dead woman. Who is she? Who killed her? What’s the relationship between Ganesh and Sobhana? How did Bharath solve the mystery? These questions will be answered in the main movie.

The story and the way of its narration are so engaging. Though it’s the debut of Mu Maran, he handled the movie in a good manner. The first half runs at a slow pace and the engaging screenplay makes the second half more interesting. The crisp runtime is one of the biggest assets of the movie.

Arulnithi is good and he performed well. Mahima Nambiar looks pretty and the scenes between the lead pair in the first half are enjoyable. Ajmal needs to be praised for his performance as an antagonist. The rest of the characters like Anandraj and John Vijay also have significant roles and they justified their roles.

The story runs on a slow note in the first half. Though it’s all about setting an engaging latter part, it could have been more intriguing from the beginning. Too many twists and turns in the second half might confuse audiences. Some of the scenes need to be trimmed to make Reyiki Veyi Kallu a better thriller.

Debutant director Mu Maran makes a decent thriller with engaging twists and turns. He is successful in narrating it in a well and intriguing way. Music plays an important role in this kind of thrillers and Sam CS takes care of it quite well. The cinematography and the production values are fine. Editing could have been better to make the movie an edge-of-the-seat thriller.

On the whole, Reyiki Veyi Kallu is a passable thriller. The first half is not so impressive and the second half is engaging but confusing at times. The climax is one of the best parts of the film. Those who enjoy suspense and thriller movies can give it a watch this weekend.