OTT Review : Sita on The Road- Telugu film on Zeeplex 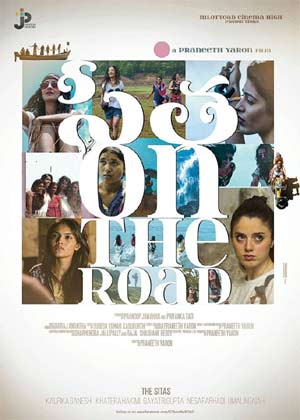 Actor turned filmmaker Praneeth Yaron’s film, Sita on The Road, had a direct OTT release on Zeeplex today. Let’s see how it is.

The film is all about five women, portrayed by Kalpika Ganesh, Khatera Hakimi, Gayatri Gupta, Nesa Farhadi, and Uma Lingaiah, who come from five different backgrounds and are going through their own issues. The kind of circumstances that make them go on a road trip and the changes that occur during their trip form the rest of the tale.

Most of the film runs in the Karnataka backdrop and the natural and unseen locations are picturized nicely. All the five women – Kalpika Ganesh, Gayatri Gupta, Nesa Farhadi, Uma, and Khatera Hakimi, are decent in their given roles.

Kalpika is quite good in her role and did her part exceptionally well. Khatera Hakimi is good in her bold role and Gayatri and Uma are okay as the innocent small-town girls. On the other hand, Nesa Farhadi did an okayish job as a book author who undergoes a lot of pain.

Though these women have their own stories of frustration and struggles, their tracks lacked a proper execution. As the narration lacks a gripping screenplay, the proceedings run on a plain note and leave the viewers clueless for the most part.

The overlapping and meeting scenes featuring the five characters look silly and hardly create any impact. Yet another minus for the film is that the emotional bonding or connection between the characters is completely missing and this creates no drama at all.

Director Praneeth Yaron’s concept of exploring the lives of five frustrated women longing for freedom is decent, but he fails in presenting it in an engaging manner. Apart from direction, Praneeth also handled multiple crafts like editing, background score and dialogues for the film for which he should be appreciated.

Two songs in the film are good to watch on screen. Visuals provided by Prem Adivi and Raj Anantha are the best part of the film, as they captured the locations well. Production values for this limited budget film are okay.

On the whole, Sita on the Road is a story of five women who seek liberation in life. The idea is good on paper, but the execution falls flat totally and the emotions go for a toss, making this film a tedious watch this weekend.