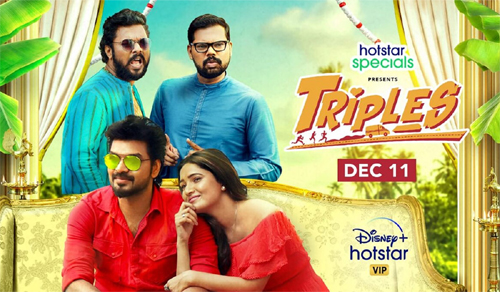 So, continuing the series of reviewing movies and shows, our today’s pick is Triples, the Tamil web series dubbed in Telugu. Starring Jai and Vani Bhojan, the series is available on Disney Hotstar. Let’s see how it is.

Ram(Jai) runs a cafe with his close friends. He falls in love with Meera(Vani Bhojan) and ties the knot with her. But due to differences, the couple gets separated. Jai moves ahead in life and decides to marry Mythili(Madhuri). Right when he is going to tie the knot, Meera makes a re-entry saying that she is pregnant. What will Ram do now? How will he handle this crazy situation forms the rest of the story of Triples?

Jai gets a meaty role and such crazy characters suit him well. The noted actor does well in his role and his comedy timing is on point. Such roles are a cakewalk for him and Jai is the best part of the show and mostly carries the proceedings on his shoulders. Vani Bhojan is also good in her key role but she looks a bit overdone in a few scenes, thanks to the wayward narration. Madhuri Jain was also neat in her simple role

But the fun part of the show comes from Vivek Prasanna and Rajkumar. These two actors get lengthy roles and derive good comedy for the audience. The production values of the show are top-notch and the manner in which the story is established in the first two episodes look good. Visuals are good and so was the art direction. The confusion comedy in a few scenes is also handled well in the series.

One of the biggest drawbacks of the show is the consistency of the writing which fails for the most part. There was absolutely no need to have eight episodes for this simple story. A triangular husband-wife kind of a story with the other woman angle. A crime comedy angle, all this we have seen in so many films already.

The comedy does not work in most parts and this is where the fun falters. Initially, the fun and set up looks good but as the show progresses, it becomes mundane. The subplots are a big negative aspect of the show and kill the runtime. The emotions between the principal characters are not established well and things click only by the end who is too late.

The romantic tracks do not have depth and why Ram and Meera separate in the first place is not established well making things look dull. Editing is horrible as many boring and silly scenes should have been chopped off.

On the whole, Triple is a routine family drama that tries hard to evoke laughter. Though it starts on an impressive note and has some fun sequences, the latter part of the show falls apart and becomes predictable, boring, and over the top. Watch it only if you like loud comedy.