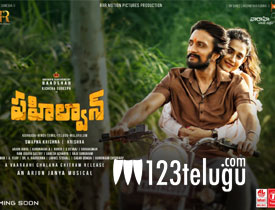 Pailwan has been marketed heavily as it is Kicha Sudeep’s biggest film to date. The film has released in several languages today and lets see how it turns out to be.

Krishna(Sudeep) is an orphan who is brought up by a wrestling guru Sarkar(Sunil Shetty). He trains him to become this top wrestler in his state and wants Krishna to win the national championship. But the twist in the tale arises when Krishna forgets his goal and falls in love with Akanksha Singh. This upsets Sarkar and he kicks out Krishna from his life. The rest of the story is as to how Krishna fights back in life and wins Sarkar’s heart by taking part in a boxing championship.

Kicha Sudeep’s makeover is the biggest highlight of the film. The manner in which he has worked on his body, fights, and performance is top-notch. He has a terrific screen presence and that has been elevated superbly which will be a feast for his Kannada fans.

Sunil Shetty is at his best and brings a lot of depth to the film with his mature act. He as the senior wrestling coach looks fit and all his scenes with Kicha Sudeep are designed superbly. Aakanksha Singh gets a key role and is very impressive in both shades of her character.

Kabir Singh, who plays the bad guy is neat in his role. The film is started well and the story is established nicely. The interval point is also good as the emotions and action are mixed well. Sushanth Singh is perfect as the jealous king.

The boxing setup, the background score is superb and elevate the film well. Fights composed look stylish and showcase Sudeep in a heroic manner.

One of the biggest drawbacks of the film is the storyline. It is heavily inspired by several films like Sultan, Bhadrachalam and many more sports dramas that have come out in recent times. There is no novelty in the proceedings as it has only been made to elevate Sudeep’s mass image.

One more drawback is the length of the film which is painfully long. There are many episodes which sidetrack the film in both the halves. In the first half, the boring romantic track eats most of the runtime. If this was not enough, the emotional angle of kids and Sushanth Singh’s track bores the audience in the second half.

If the makers would have been on point the film would have made all the difference. It’s like the makers have touched all the commercial angles just to elevate Sudeep’s heroics and sadly they bog down the film in many areas. The climax of the film is routine and is dragged for no reason.

Production values of the film are top-notch as the camerawork and visuals are brilliant. Music is ordinary but the BGM is on another level and elevates the film completely. Telugu dubbing is quite good. Editing is pathetic as at least 20 minutes could have been easily edited. The screenplay is decent but could have been good in the second half.

Coming to the director Krishna, he has done an average job with the film. He has made the film keeping the Kannada audience in mind and showcased Sudeep in a superb manner. If you think in the Kannada perspective, his work will be appreciated as it is new for those audience to see Sudeep in such a mass angle. But for other languages, he work is below par as his story and execution are a rip of several sports dramas and have nothing new to showcase.

On the whole, Pailwan is a sports drama with a very routine story and execution. Kannada audience will love Sudeep and his screen presence as the film has plenty of commercial aspects which will please the masses there. But a lengthy runtime, predictable plot and ordinary narration makes the film in Telugu a strictly okay watch this weekend. Go in well prepared as there is nothing new that will be showcased here.