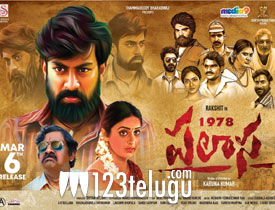 Palasa 1978 is a film that has been promoted a lot in the last few days. The film directed by Karuna Kumar has hit the screens today. Let’s see how it is.

The film is set in early 1978 in a village called Palasa which falls in Srikakulam district. Guru Murthy(Raghu Kunche) and his brother always keep suppressing the poor and two brothers revolt against them. Things become so serious that these brothers leave everything and become goons in order to save themselves and their tribe. The rest of the story is as to what happened to their lives and how they try to bring about a change in that area.

The film is filled with a lot of realistic scenes which look quite hard-hitting on screen. There are no forced emotions in the film and that is the biggest asset. The screenplay is the biggest plus as none of the scenes lack logic or are there just for the sake of it.

Raghu Kunche is the surprise package of the film as he is quite good as the main villain. He has changed his body language a lot and will be a good character actor if given more chances. But his best work is the music and BGM that lift the film to a whole new level.

Young hero Rakshit, is good in his hard-hitting role and makes full use of the opportunities. The actor who played his brother is also superb in the film. The combination of scenes between the brothers is very good. The first half of the film is racy as director Karuna has stuck to the theme.

The story of the film is quite predictable as it is te fight between the rich and the poor. So, you can easily guess what is going to happen next. The film is clearly for a section of the audience who likes dark and serious cinema.

The climax of the film lacks the punch even though it is ended with a good message. The way the hero’s character is shown roaming around and comes back after years to take revenge once again looks a bit artificial.

As said earlier, the music and BGM by Raghu Kunche is top-notch. The production values of the film are superb as the film looks rich for the money spent. The art direction and camera work need special mention as the locations and the gritty areas of Palasa have been showcased superbly. But the dialogues need a special mention as they are novel, realistic and some are even quite depthful. Editing in the second half could have been better.

Coming to the director Karuna Kumar, he makes a decent debut and is surely a find. His eye for detail is superb and the way he has extracted performances is also top-notch. The message he has conveyed through the film and the manner in which he narrated the film with a good screenplay makes the film look interesting.

On the whole, Palasa 1978 is a realistic village drama that showcases the atrocities of the rich towards the backward castes in the early years. Realistic performances, good screenplay, and superb dialogues are basic assets. On the flip side, a predictable storyline, a bit slow second half takes the film down. The film is a for the select audience but needs to be encouraged as it is rustic, hard hitting and can be given a shot this weekend for it’s unique setup.