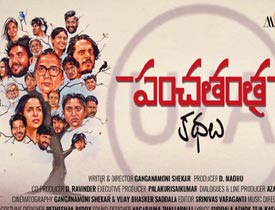 An anthology film titled Panchatantra Kathalu starring Noel and Nandhini Rai in key roles has hit the screens today. Let’s see how it is

As the title suggests the film revolves around 5 stories that are separate altogether. They include a story involving a high caste girl and low caste boy who love each other but couldn’t marry due to community problems, a story of a woman who gets involved in prostitution to take care of her small kid and whose life changes due to a traveler, a story of a selfish girl who ditches her boyfriend to marry a rich person to lead a luxurious life, a love story between an owner of dance academy and his secret admirer that happens through phone conversations, a story of an old woman who wishes to live on her own, but her children take turns to look after her.

The writing is the biggest positive factor as they brought a lot of depth to each of the stories. The characters are well written and the creative team succeeded in explaining their ideas very clearly for most of the stories.

For instance, there is a sequence that involves the prostitute’s kid closing the house door when his mother does her job. This entire episode is very disturbing and heart-touching at the same time. The character arc of the prostitute role is well depicted.

The performances by the entire cast are good and do justice to the script. One of the episodes is very novel. The tragic endings in a few stories are dealt well and they are hard to digest as well.

There are certain drawbacks as well in this anthology. The main one would definitely be its pacing. Each scene was of long duration and they were dragged unnecessarily for no reason which hinders the overall impact.

The director takes a very long time to establish each of the stories. Few stories were bold and they don’t cater to all sections of the audience. The drama in a few scenes doesn’t unfold well.

There are few blocks that really don’t have significance to the stories. Dialogues are flat and few were written in a very poetic manner making them difficult to comprehend. The ending in the final story is abrupt and this story lacks clarity regarding what it actually is stressing about.

The editing team did a below-par job as the sequences are way too lengthy. Had the editor made them crisp, the film would have been a great one. The music department disappoints. The background score too doesn’t add much value to the proceedings.

Coming to the director Ganganamoni Shekar, he has done a decent job in telling the stories. But he could have done a lot better in projecting them in an engaging manner. The characters are presented well and the writing team should be also credited for it. The camera work is decent. The production values are okayish.

On the whole, Panchatantra Kathalu is good in parts. The director and the writing team came up with good and hard-hitting plot points that were supported by fine performances. On the flip side, the editing team made the film look more lengthy. Also, the unwanted scenes, slow pacing, and lack of engaging screenplay play a spoilsport in this film. You can watch this if you love watching hard-hitting drama.