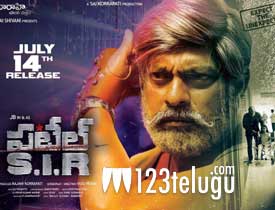 Senior actor, Jagapathi Babu is back as the main lead with his latest film Patel SIR. Directed by debutante Vasu Parimi, this film has hit the screens today. Let’s see how it is.

Subhash Patel(JB) is a retired army officer who leads a happy and pleasant life with his family. Due to some unexpected incidents that happened in his life, he targets DR’s (Kabir Singh) gang and finishes them one by one.

Why did Subash target them? What circumstances made him a serial killer? and what is the back story behind this? To know the answers, you have to watch the film in theaters.

Undoubtedly, Patel SIR is JB’s one man show. He completely carried the film on his shoulders and brought depth to the proceedings with his stylish looks and performance. His screen presence and dialogue delivery are apt for his role.

Heroine Padmapriya did a decent job in her limited screen presence. The little girl who played a key role in the film is very impressive with her facial expressions. Posani’s comedy is good in parts. Subba Raju, Kabir Singh, and actor Prudhvi are decent in their respective roles.

Tanya Hope did an okayish job as a stylish cop. The second half of the film has some very good emotional content and elevates the proceedings decently.

The story of the film is quite routine and has nothing new to offer except for the characterization of JB. The first half of the film runs on a flat note. Though there are a few hero elevation scenes, it lacks a gripping screenplay.

Most of the time the film moves back and forth in time which is not necessary considering its genre. A few unnecessary scenes in the first half can be removed as they only increase the film’s runtime.

As said above, director Vasu Parimi’s story has nothing new to offer but he tried to narrate the film with some emotional proceedings during the second half. If he had concentrated on the first half the output would have been even better.

Editing work by Goutham Raju is okay as a few unwanted scenes in the first half can be easily chopped off. Cinematography by Shyam K Naidu is good as every frame looks impressive. Music by DJ Vasanth is okay and so was his background score. Production values by Vaaraahi Chalana Chitram are quite rich as the film looks very stylish and contemporary.

On the whole, Patel SIR is Jagapathi Babu’s show all the way. He excelled in his role and is the main attraction for the film. Though the first half of the film runs on a flat note, the emotional scenes in the second half  save the film to an extent. All those who like revenge dramas can give this film a shot but the rest need to go in with minimal expectations.