Review : Plan B – Confused and botched up thriller 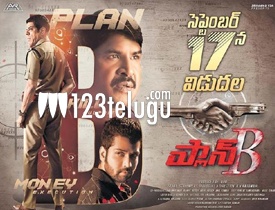 Continuing the trend of reviewing low-budget films, today, we look at Plan B. The film is out now and let’s see how it is.

The film is set in a small village in AP where none of the couples have children. A doctor enters the scene and treats everyone in the way that they have kids. But one couple still gets unlucky. So, the doctor uses the IVF technique and makes sure that the couple has a baby. This is also the time when Viswanath(Srinivas Reddy) and his wife deliver a baby. But the twist in the tale arises when both the babies of Vishwanath and the other couple look the same. If this was not enough, the issues in the village create confusion. How all this is solved by a cop played by Murali Sharma is the rest of the story.

Srinivasa Reddy plays the main lead and he does quite well. He had three shades to portray and the noted actor has done a good job. Surya Vashishta is also neat in his key role. Murali Sharma as the cop does what is needed.

The suspense, crime, and thrill factors have been used well for the most part. The background score plays a major role as it elevates the film quite well. The concept and basic story idea are also neat.

The film starts on a confusing note. The serial murders look good on screen but their outcome and the story behind them are revealed in a confusing manner. This is because of the dull screenplay by director Rajamahi.

The first half is a bit dull and is filled with repeated scenes. The logic goes for a big toss and the emotions look forced. As said earlier, the screenplay does not allow emotions to connect with the audience.

The camerawork of the film is impressive. The editing part is average as the first half could have been trimmed even more. The film has serial murders and the way they are unleashed is not good to see. The production values are just about okay and so was the production design.

On the whole, Plan B has an okay premise but is completely spoilt with a confusing narration. Though a few thrills are good, the logic goes for a toss and makes this film a confusing and botched-up thriller.