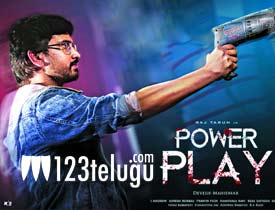 Raj Tharun and director Vijay Kumar Konda have teamed up once again after Orrey Bujjiga for a serious film called Power Play. The film has released today and let’s see how it is.

Vijay(Raj Tharun) loves Keerthy(Hemal Ingle) and decides to marry her. He is also on the verge of getting a good government job. Right, when the couple convinces their elders to get married, a fake note scam gets Vijay in big trouble and things fall apart. What is this scam? Who is behind it? and how did Vijay solve his problems by himself? That forms the rest of the story.

Raj Tharun takes a U-turn from his lover boy image and does well in his serious role. He has changed his body language, dialogue delivery, and mannerisms for this role and he gives an impressive performance. Heroine Hemal was neat in her homely look and did her part convincingly.

The main villain, Ajay was at his usual best in this film. The hero’s track, characters related to him are shown quite nicely in the film. The twists in the second half and the way the suspense is revealed look good.

Yet another major attraction was heroine Poorna who did a special role. She was superb and brings a solid effect to the film in key scenes. The rest of the cast and the color tone of this thriller was also good.

The concept of the film is good but the required thrills are not up to the mark. The fake note scam posed on the hero looks a bit over the top and could have been unleashed in a better manner. There are so many scenes that drag this episode and make things dull.

A few emotions in the film look a bit forced in the first half. The love track and chemistry between the lead pair is dull. Apart from the twist in the second half, the rest of the proceedings end up being not that effective.

Production values of the film are top-notch and special mention should go to the camera work which is stunning. Every frame and lighting set to create a serious mood look good in this thriller. Editing is apt and so was the production design. The BGM is also good and elevates even the dull scenes.

Coming to the director Vijay, he has done a passable job. His writing could have been more effective but the manner in which he showcased the thrills and ended the film looked okay.

On the whole, Power Play is a crime thriller that has some engaging moments here and there. Raj Tharun does well in his new avatar and the twists showcased in the second half are executed quite well. Barring the dull emotions and a few dragged crime scenes in the first half, this film ends as a passable watch if you have nothing else to do.