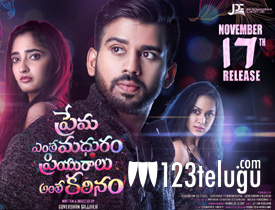 Prema Entha Madhuram Priyuralu Antha Katinam is one low budget film which has hit the screens today. Let’s see how it is.

Jai(Chandrakanth Dutta) is a young guy who goes to the US in search of his lover Maithili(Radhika). As time passes by, he meets Sara(Pallavi Dora) and becomes close to her. Sara too starts liking him but Jai is only in deep love with Maidhili and keeps searching for her ignoring Sara. Upset with this, Sara starts irritating Jai. Rest of the story is as to how Jai manages to deal with Sara and finds his lover Maithili.

The way director Govardhan has showcased the triangular love story in the form of the reverse screenplay is pretty decent. Debutante Chandrakanth Datta makes a very impressive debut as his performance is subtle and to the point.

Radhika Malhotra also does quite well in her role which has negative shades at times. The chemistry executed between the lead pair is also quite impressive. Gemini Ganesh’s comedy works out in parts.

Yet another basic asset of the film is the music score by Jatin Roshan. All the songs were quite refreshing. The basic twist revealed during the breakpoint is quite convincing.

The basic emotions in the film do not create much depth to the proceedings. Once the twist is revealed post the interval, we can easily predict every single scene from there.

The second heroine’s behavior post her break up is not executed well. There should have been more depth to her role which would have given better output to the proceedings.

As said earlier, Jatin Roshan’s music is good. The camerawork is pretty decent and showcases the natural locations quite well. Editing is decent and so were the production values. Coming to the director Govardhan, he has done an okay job with his debut film. He has the capability of becoming a good director as he has the skills of managing the proceedings well. But here in PEMPAK, his script is weak and does not allow him to do much as a director.

On the whole, PEMPAK is a triangular love story which has a decent premise and is handled well to a point. But post the first half, things get out of hand as the film gets highly predictable and routine. Debutante director Govardhan proves that he has in him to make a mark in the future. But on a general note, his debut film does not have that great kick which is expected of love stories and ends up as just a below average watch this weekend.