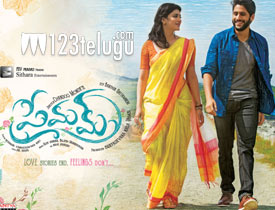 Premam is one film which has been awaited with huge eagerness from a long time. Remake of a Malayalam classic with the same name, this film has hit the screens today. Let’s see how it is.

The story of the film is basically the journey of Vikram (Naga Chaitanya) through three different stages of his life. He falls in love with three different girls Suma (Anupama Parameswaran) Sithara (Shruthi Hassan) and Sindhu (Madonna).

But the twist is that he fails each time he proposes to them. Rest of the story is as to how Vikram finally settles down and with whom.

Premam completely belongs to Naga Chaitanya as he springs a huge surprise with his performance. You will see a new updated version of the young hero as the youth and female fans will love him in his role. The way he has showcased variations in his looks and performance is top notch.

One of the biggest assets of the film is that the makers have not tried to copy the film as it is. They have changed the flavor a bit and narrated the film with ample entertainment.

The film has good comedy throughout and artists like Srinivas Reddy, Brahmaji, Praveen and others evoke some huge laughs throughout the film. The first half is racy and has many entertaining moments.

Even though there will be a lot of debate about Shruthi Haasan’s role, she has done a decent job in the film. Both Anupama Parameswaran and Madonna Sabastian perform well in their roles and make the casting interesting.

Premam will draw huge comparisons from the original. All those who saw the original might find many scenes and the casting to be a bit off track. The film has some very slow narration which might no well with some audience.

Shruthi Haasan’s role is a bit different as she could have been showcased in a better way. The story is also predictable after a point as the film moves on a single point agenda.

Premam has superb production values and cameraman Karthik does a brilliant job in showcasing the various time zones in a superb way. Music is also a huge asset as all the songs sound well and have been shot quite decently. The screenplay is apt as the proceedings have been showcased in a very engaging manner. Dialogues are quite good as they reflect the mood of the youngsters well.

Coming to the director Chandoo Mondeti, he needs to be completely applauded for the way he as made Premam. He had enormous pressure on him to successfully remake the film and boy, he has done a superb job with the narration. The way he has added good entertainment and presents all the three stories in a fresh way makes Premam quite interesting.

One the whole, Premam will undoubtedly be the film that will take Naga Chaitanya to the next level as a star. He surprises you with his standout performance and is the sole reason to watch Premam. Romantic songs, entertaining narration and a feel-good nature of the script will surely be loved by the audience big time. If you stop drawing comparisons from the original and go with an open mind, Premam is one romantic entertainer which will keep you hooked throughout and makes up for a good watch this festival season.