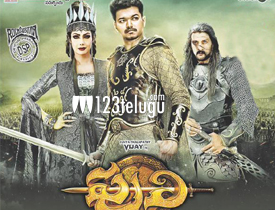 Vijay’s Puli is one of the most awaited films in the recent past. Starring a huge line up of superstars, this film is directed by Chimbu Devan and has hit the screens today. Let’s see how it turns out to be.

The story is set in a fantasy kingdom called Bhetala Desam which is ruled by an evil princes Yavvana Rani(Sridevi). She tortures everyone and occupies the near by sixty villages.

On the other hand, Manoharudu(Vijay) is a daring fighter from one of the villages which is ruled by Yavvana Rani. As time passes by, Manoharudu falls in love with his childhood friend Mandara Malli(Shruthi Haasan). Things take an ugly turn when Malli gets kidnapped by some goons from Bhetala Desam.

An upset Manohardu takes things in hand and decides to enter the fantasy kingdom to save his lady love. Will he be successful ? What are the obstacles that he faces in his journey ? That forms the rest of the story.

Major plus point of the film is the visual grandeur. Puli has top notch visuals and reminds you of some Hollywood films instantly. Credit should go to the makers for trying something new and executing it on a huge scale. Vijay is the main stay and suits his role well.

Sridevi makes a striking comeback and looks menacing in her negative role. Her costumes, make up and the way she has portrayed her character is top notch. Shruthi Haasan looks stunning and oozes glamour big time. Hansika is decent in her role and provides the necessary eye candy.

The graphics used in showcasing the lavish castles and locations give the film a rich look. Second half of the film is where the actual action begins. Sudeep does a superb job in his negative role.

One of the major disappointments of Puli is the way Chimbu Devan executes the film. His narration lacks focus as he could not implement what was written on paper. The film is tediously long and takes for ever to wrap up. First half has no basic story and moves on Vijay and Shruthi Haasan’s romantic track.

Even though the film is visually good, there are certain scenes which lack clarity. The flashback showcased looks jaded and deviates the film big time. Songs are yet another huge drawback of the film. They come at regular intervals and spoil the mood of the film.

Screenplay is pathetic as many scenes have just been added for the sake of commercial touch. Logics go missing big time and the way Vijay’s character behaves in certain scenes looks confusing.

Puli is technically a very strong film. The film is quite grand and showcases some never before scenes in Indian films. Camera work is awesome and showcases the fantasy kingdom in a stunning light. Costumes used for Sridevi and her make up needs a special mention. As said earlier, Devi Sri Prasad’s music is pretty bad and so is his background score.

The visual effects that have been used to create animals like the tortoise and black tiger catch the imagination and will be liked by the kids big time. Screenplay goes haywire and confuses the audience after a point. Director Chimbu Devan does a mediocre job and adds unnecessary scenes and complicates the plot.

On the whole, Puli is a film with good concept and bad execution. The boring narration and lack luster screenplay spoils the mood of the film big time. Other than the impressive visuals and stellar performances by Vijay and Sridevi, this fantasy drama has nothing much to offer. All those who are interested in multi-starrers and lavish film making can give this film a shot, others can take it easy.