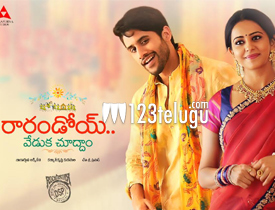 Rarandoi Veduka Chuddam has created a huge hype for itself with its interesting trailers and music score. After a huge round of promotions, the family drama has hit the screens today. Let’s see how it is.

Brahamarambha(Rakul Preet) shares a very close relationship with her father. During one of her family weddings, Shiva(Chaitanya) falls head over heels for her. The scene shifts to Vizag where Brahamarambha comes to pursue her further studies. Shiva continues to charm her but Brahamarambha never acknowledges Shiva’s true love and gets into a huge fight because of a silly incident.

But then it is too late as Shiva breaks up with Brahamarambha and moves on with his life. This is the time when Brahamarambha realises Shiva’s true love and decides to get back to him. But there is a bigger problem in front of her featuring Shiva’s dad(Jagapathi Babu).

What will Brahamarambha do now? What are these family problems? and how does the couple get back together? That forms the rest of the story.

The entire film is showcased through Rakul’s character and she is the mainstay of the film and gives a superb performance as Brahamarambha. Right from her looks to her attitude, Rakul gives a very innocent yet balanced performance. She is exceptional in all her emotional scenes during the climax and showcases the true actress in her.

If Premam showcased, Naga Chaitanya in a mass role, Rarandoi has the handsome star in a boy next door role. Chaitu looks good and is at ease with his character. His performance during the breakup scene is too good and as he brings in his lover boy image to full strength. His chemistry with Rakul is also pretty good and is the biggest highlight of the film.

The second half is where the actual family drama begins and the proceedings become quite interesting with a good screenplay and fast based narration. Sampath and Jagapathi Babu do their best in their supporting roles. Once again, Vennela Kishore shines with his comedy touch and evokes good laughs with his comedy.

After starting the film with a positive and colorful note, the film falls flat once the scenes shifts to Vizag. The proceedings become lethargic and the pace bogs down completely.

Once again, the story of the film is quite routine and has nothing to cheer about. Many said that the film has similarities of Ninne Pelladutha but Rarandoi is nowhere close to the classic in any area.

Even though the songs are good, their placement is very bad. A breakup song erupts out of nowhere in serious situations. Even the good songs which are showcased are ended abruptly.

Devi Sri Prasad’s music is very good but his songs are not utilized well. Production values by Annapurna studios are top notch as the film is vibrant and has good supporting artists. Dialogues are decent and so was the camera work. Rakul has been styled superbly in the film as her costumes give a lot of depth to her character.

Coming to director Kalyan Krishna, Rarandoi is nowhere close to his debut film Soggade Chinni Nayana. The talented director’s narration wanders here and there and only catches up at the half time. But from there, Kalyan Krishna wastes no time and brings in good emotions and an interesting love story which saves the film completely. His script had so much scope for comedy and romance which he misses out in many occasions.

On the whole, Rarandoi Veduka Chuddam is a decent family entertainer which has some good moments. It will surely take Chaitanya to the next league because of his improved stamina to hold a film together. Even though the first half is pretty ordinary, the makers add good drama, nice love story and strong emotions in the second half to save the film. The summer season will surely help the film get decent crowds to the theaters but we suggest you keep your expectations in check and watch the film with an easy going attitude.