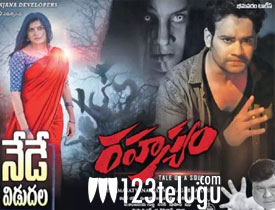 Rahasyam is one horror thriller which has made its way to the theaters today. Let’s see whether it has anything interesting in store for us.

Ravi(Sailesh) is an aspiring director who gets a chance of making his first horror thriller. In order to make one, he decides to know more about evil spirits and visits a Baba. In a sudden turn of events there, an evil spirit called Divya(Rithika) starts chasing him and forces Ravi to cast her as the heroine of the film. Who is this Divya? Why is she after Ravi? Will Ravi make a film with a ghost? What happens during the course of time? To know all this, you need to watch the film on the big screen.

Some horror scenes in the first half have been handled well. Heroine’s track has been executed well and especially her love story looks decent. The horror scenes showcased between the lead pair throughout the film are okay.

Sagar Sailesh is decent as the hero and does well in his complex role. He did his homework and performed well in most of the scenes in the film. Heroine Ritika is impressive with her role and did her part with the best of the emotions which she showcased.

Director Sailesh’s idea is good but his narration lacks the basic flow. The second half goes for a toss and this is where the proceedings get bogged down completely.

The film is started well and makes some sense but the makers add some silly scenes just for the sake of commercial aspect and divert the attention of the audience repeatedly. The director failed to elevate the key concept even though the story had a good scope and this is where the second half falls flat.

Music by Kabir Rafi is neat but his background score is even better and elevates the film well. Editing is decent but the second half could have been trimmed even more to make things crisp. Camerawork by Sudhakar is neat as he showcased the horror setup quite well throughout the film. Production values of the film are also okay. Coming to the director Sailesh, he did not use the plot well and made the film in a bland manner.

On the whole, Rahasyam is a routine horror thriller which has a decent concept but the execution is pretty ordinary. Sagar Sailesh clicks as an actor but his directional skills lack the magic and make the movie a pretty disappointing watch this week. Nothing new