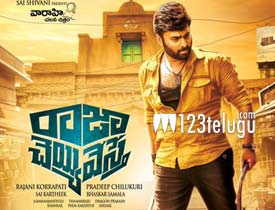 Nara Rohit is back with yet another action entertainer Raja Cheyyi Veste which has hit the screens today. Let’s see how it is.

Raja Ram (Nara Rohit) is a wannabe film director who’s sole aim is to direct a script that he has written. He is also in a relationship with Chaitra (Isha Talwar), who is a software employee.

On the other hand, Vijay Manik (Tarakaratna) is a cruel murderer who is feared even by the politicians. One fine day, two unknown persons try to assassinate Vijay, and while one gets shot and killed, the other escapes. Vijay vows to kill the person who escaped.

As time passes by, Raja Ram gets a letter from an unknown person claiming to be a star director who tells him that he is impressed by his script and to test his caliber, asks him to write a climax for a movie that he is currently shooting.

Raja Ram agrees to this and does the needful. Impressed by the climax sent by Raja Ram, the director surprises Raja by sending him a gun and a photo of Vijay Manik and blackmails him to kill the dreaded murderer.

Who is this star director? Why does he want Raja to kill Vijay ? What is the relation between Raja Ram and Vijay Manik? Will Raja manage to kill Vijay? These questions form the crux of the story.

One of the major plus points of the film is the casting. Nara Rohit carries his role with ease and is comfortable with a range of emotions. Isha Talwar is beautiful and is an apt fit for her role. She is also good with her expressions and manages to take everyone by surprise.

Tarakaratna steals the show with his menacing looks and superb acting. If Tarakaratna chooses this path, he has a long career ahead of him. Yet another major plus are the twists as they manage to keep you entertained at regular intervals. Also, the mind games shown in the second half have been executed well.

Interval block has been showcased well and creates an interesting cliff-hanger for the second half. The main story lies in the second half and it manages to entertain the viewers to an extent.

Even though the film starts off on an interesting note, the overall story ends up being a disappointment once the twists are revealed. The movie takes its own sweet time to kick start the actual story and these parts end up boring the viewer.

Also, the love track between the lead pair is prolonged and could have been easily left out. First half is a big down point as it carries no story nor entertainment. Even though the director tries to include forced humor and a love track, they do not work at all. The whole reason behind the revenge drama is very weak and ends up taking away the value from the overall story.

Songs come in as major speed-breakers, especially during the second half and could have easily been edited out. Heroine’s childhood flashback is also very weak and unappealing. A shorter run-time and a racy screenplay could have improved the movie by leaps and bounds.

Coming from a prestigious production house, the production values are exceptional. Music by Sai Karthik is very weak, although the background score manages to impress. Editing is mostly sub-par as many scenes and songs could have been left out.

On the whole, Raja Cheyyi Veste is a mind-game thriller that manages to impress in bits. Even though the casting is spot on and the twists are interesting, the overall narration and story manages to overshadow the positives making it just an average affair this weekend.