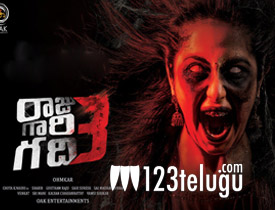 Omkar is back with yet another movie in his famous franchise Raju Gari Gandhi 3. The film has Ashwin Babu and Avika Gor as the leads and has hit the screens today. Let’s see how it is.

Ashwin(Ashwin Babu) is an auto driver who creates a big nuisance in his colony. On the other hand, whoever proposes Maya(Avika Gor) keeps getting tortured by evil spirits. So all the members in the colony develop a special plan and make Ashwin fall in love with Maya. The moment he proposes to her, strange things start happening with Ashwin. Who is this Maya? What is her background? and how will Ashwin solve this mystery is the whole story of the film.

Unlike Raju Gari Gadhi 2, Omkar has concentrated more on fun and entertainment. He has filled the second half with loads of comedy which is the biggest highlight. A 20 minute horror comedy episode in a bungalow during this time is hilarious and creates solid fun.

When compared to his previous films, Ashwin looks better and has developed a lot. He has danced well and performance wise too, he is pretty good in the film. Omkar has elevated all his talents well in the film. Brahmaji was good as the helpless doctor. Dhanraj does well in his limited role.

Star comedian Ali once again proves why his comedy is never out of form. He gets a superb role and evokes good comedy throughout the film. His horror comedy scenes with Ajay Ghosh are hilarious in the second half. Ajay Ghosh is also pretty good as the fake baba and is given able support by senir actress Oorvashi. Their combination scenes are pretty good.

Avika Gor is good in the climax and does well in her limited role. The colony mates played by Prabhas Sreenu, Hari Teja, and Getup Sreenu have done a good job in their roles. The camera work is superb and showcases the horror comedy in a good light.

One of the basic drawbacks of the film is that there it has no seriousness in the script. The story is started on a serious note and when everyone thinks that there will be a crazy twist behind the problems, Omkar dilutes the plot and focuses on entertainment.

The logic goes for a toss and everything is sidetracked for the sake of comedy which is good. But a better focus on story and content would have made matters even better. The climax is strictly okay as the film is ended In a jiffy.

The first half is dull as there is nothing special that happens here. The story starts only in the second half and the pre climax is also dull.

As said earlier, camera work by Chota K Naidu is superb. The production values are top notch and special mention to the art direction team as the production design and props used in this horror comedy are good. Music is just about okay but BGM was impressive. The funny one liners are quite impressive and those written for Ali and Ajay Ghosh are superb. Editing is neat as the film has a crisp 2 hours runtime.

Coming to the director Omkar, he has done a decent job with the film. Looks like he wanted to erase all the complaints he received with Raju Gari Gadhi 2 and focused more on entertainment. He showcased his brother well and added good fun in the second half. But in all this, he left out the story and logic. There are many over the top scenes in the film but are all covered with continuous fun in the second half.

On the whole, Raju Gari Gadhi 3 is a timepass horror comedy which has decent fun in the second half. A 20 minute episode evokes superb fun and entertains the audience. But the concept is quite silly and logic goes for a toss throughout. This is a kind of a film which the masses will like and all those who love over the top comedy can give this film a shot. Don’t look for any story and just go with the flow to enjoy the film.