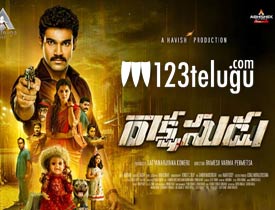 Rakshasudu is a film which is a do or die situation for Bellamkonda Sreenivas as he needs to score a hit to stay afloat in the industry. The film has hit the screens today and lets see how the film turns out to be.

Arun(Bellamkonda Srinivas)is a struggling director who gets his father’s job of a cop. During the same time, teenage girls in the city keep getting kidnapped one after the other. The case comes to Arun and his team. The twist in the tale arises when Arun’s nice gets kidnapped all of a sudden. The rest of the story is as to how Arun cracks the case and nabs the killer behind it.

The concept of the film is very good and has been narrated in a gripping manner. Even though you know that there is a serial killer who will get caught at the end, the manner in which the cops reach him through good cat and mouse game has been handled well.

Bellamkonda Srinivas sheds his mass image and surprises with his acting skills. He is neat and plays according to his character and displays superb emotions throughout the film. Anupama Parameswaran gets a decent role and makes good use of it.

Rajeev Kanakala is apt in his role of a cop and his performance in one particular scene during his daughter’s kidnapping is amazing. The supporting characters like Kasi Vishwanath and other actors did their job well.
The realistic setting looks good. The second half becomes even more gripping and the climax is handled well by the director. The twists that are showcased are pretty impressive and handled well by the director.

The pre climax could have been handled well as there is a scene where the killer gets caught by a cop and he does not shoot him. Just to prolong the film, scenes are deviated and this could have avoided.

Ghibran’s background score adds a lot of depth to the film and lifts the last 20 minutes to another level. Production values are decent as the set up, actors and production design has been retained from the original. The fights composed look good. Editing is apt and so was the gripping camerawork which showcased the film in a taut manner.

Coming to the director Ramesh Varma, he has done a decent job with the film and stayed true to the original. He did not experiment much and add unnecessary scenes or fights for Bellamkonda which is impressive. His narration is gripping as he managed to show the film without many boring moments which is the best point.

On the whole, Rakshasudu will give Bellamkonda Srinivas the much needed break which he was eagerly waiting for. The film has a decent premise and taut narration filled with good suspense makes the movie watching experience enjoyable. Thriller movie fans will love the film and the rest will find it decent. Recommended.