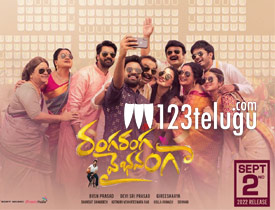 Vaishnav Tej impressed one and all with his first two films. He is now trying a family drama with a film called Ranga Ranga Vaibhavanga which has released today. Let’s see how it is.

Rishi(Vaishnav Tej) and Radha(Ketika Sharma) belong to two close knit families. They fall in love and when they think of revealing it to their parents, yet another love story in their own family creates disturbances in their relationship. Now, the couple has to handle the disjointed families and also the key man Vamsi(Naveen Chandra) who heads the girl’s side. How do they do that is the rest of the story.

Vaishnav Tej gets a makeover with this film and gets to play the lover boy and does well in his role. He handles the comedy quotient effectively and is neat in a romantic role.

Ketika sheds her glamor quotient and gets a decent role and does well. Her chemistry with Tej is amazing. Naveen Chandra gets a strong role and he was quite good in it. He brings a lot of depth to the film.

The first half has some decent comedy and one more attraction was DSP’s music which was pretty good. The supporting cast are all well known artists and they have done well in their respective roles. Comedian Satya is neat in his cameo.

One of the biggest drawbacks of the film is its routine storyline. Right from the beginning, all the romantic and family drama related scenes will remind you of some film or the other. The film is heavily inspired by films like Ninne Pelladutha, Nuvvu Leka Nenu Lenu, Nuvve Kavali, and Rama Rama Krishna Krishna to say the least.

There is absolutely no emotional depth in the film as the drama showcased is ages old. The emotions between two families are so over the top that you cringe in a few scenes. The scene where the lead pair make up after being apart for ten years looks outright silly.

The second half is a huge letdown as the proceedings are so favourable for the lead pair that things happen according to their will. By the end and with one strong scene, the conflict is cleared and this is so silly.

The production values of the film are pretty good and music by DSP was the saving grace. The dialogues were beaten to death and so was the screenplay. The production design was good and family set up looked neat.

Coming to the director Gireeshaya, he has done a very disappointing job with the film. His story, narration and screenplay are disappointing and bore the audience. He has Just borrowed scenes from several hit Telugu films and made a story which falls flat.

There is absolutely nothing novel in the narration. Stories are one and the same in many films but their treatment is different but here everything goes for a toss as the film is directed in a routine template.

On the whole, Ranga Ranga Vaibhavanga is a romantic family drama that has a routine story and mundane narration. It is a proper Kichidi of old hit Telugu films and provides a few strict laughs. Apart from some good songs, this film has nothing new to showcase.