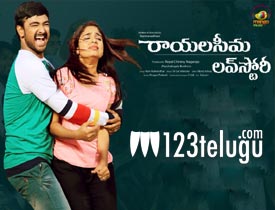 Yet another love story which has hit the screens today is Rayalaseema Love Story. Featuring all newcomers, let’s see how the film turns out to be.

Krishna(Venkat) is a happy go lucky youth who feels that love and relationships are a waste of time and spoil your life. In such a situation, a girl named Radha(Hrishali) comes into his life. Things take a U-Turn and Krishna falls in love with her. When everything seems to be going fine, a problem occurs and the couple part ways making Krishna disheartened. Why is Krishna against love in the first place? What is the problem that brought a twist in the love story? and how will Krishna and Radha finally reconcile? That forms the rest of the story.

The hero’s flashback episode in the second half has been established well in the film. The emotional thread that showcased these scenes is also pretty good. There are certain contemporary love scenes which will connect well with the present generation youth. The twists that have been showcased at crucial places are neatly thought of.

The comedy in the first half is also pretty decent. Comedian Venu gets a good track and he has done well in his role. Getup Sreenu, Prudhvi and the rest of the comedian evoked passable comedy. Heroine Hrishali looks good and did well in her lead role. The second heroine Pavani was also okay in her character. A mass romantic number between the lead pair provides decent eye candy.

After a point, too many comedy scenes disturb the flow of the film. The director adds way too many unnecessary scenes and dilutes the plot. The logic goes for a toss in the film and sidetracks the proceedings many times. Also, the basic flow in the film is not proper as the plot is wayward.

The screenplay is not proper and spoils the narration completely. The film had a good score for emotions and drama but the director failed to establish it well. The film is filled with so many forced situations that you get irritated after a point.

Music by Sri Sai is just about okay but his BGM was top notch. Editing is decent and so was the production design. Production values of the film are pretty good. The camerawork was decent as the film was shown in a rich light in the second half. Coming to the director Ram Ranadheer, he has done a disappointing job with the film. He got carried away with way too many commercial aspects and left the actual content behind making it boring for the audience.

On the whole, Rayalaseema Love Story is an outdated romantic drama which has nothing going it’s way. Except for some romantic scenes and a few comedy tidbits, this film falls flat with boring narration and makes it a pretty disappointing watch this weekend.