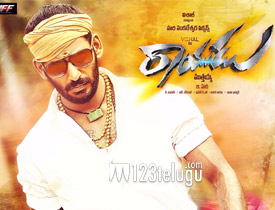 Young hero Vishal, has been going great guns in his career. He is now back with yet another action flick Rayudu which has hit the screens all over today. Let’s see how this film turns out to be.

Rayudu(Vishal) is a daily labour who works in the market yard. He lives with his grandmother and falls in love with Bhagyam(Sri Divya). As time passes by, Rayudu comes to know that both Bhagyam and her father are facing serious problems from a local goon called Rolex(R K Suresh).

As expected, Vishal takes things in hands and involves himself into the life and problems of Bhagyam. Rest of the story is as to how Rayudu stands in support of Bhagyam and takes on the deadly Rolex.

Vishal is known for doing some out and out mass roles and once again, he proves himself in Rayudu. Right from his look to the emotions, Vishal is top class in the film and is especially good in all the action sequences and is a treat to watch him pack a punch.

Sri Divya looks graceful and does her crucial role well. She is a class performer and her chemistry with Vishal is quite striking. Soori brings in the necessary comedy punches. R K Suresh who does the role of a bad guy, looks menacing and is apt for his role.

First half has some decent moments, but it is the second half where the actual story starts. All the confrontation scenes between Vishal and the villain are executed quite well. Climax fight is pretty good and has been handled supremely well.

One of the major drawbacks of the film is that a small point has been dragged way too much. The various emotions and scenes featuring Vishal’s grandmother are decent but they stretch the plot unnecessarily.

The pace of the film is also a bit slow as the director wanders after a while and does not wrap up the film quickly. There is too much melodrama at the end and the excessive violence and hardcore mass elements can you put the regular audience off at times. Story is quite simple and highly predictable till the end.

D Immam’s background score is quite good and elevates the film to a decent level. Camera work is top notch and showcases the rustic villages nicely. The dubbing done is also good. Screenplay of the film is just about okay. Just when you think, the film has caught up pace, it deviates from the topic and the scenes which come in disturb the flow.

Coming to the director Muttaiah, he has done a below average job with the film. He deviates from the point many a times and gets confused with his narration. However, the way he has showcased Vishal and brought in some high octane action scenes will go well with the masses.

On the whole, Rayudu is one film which is clearly aimed at the masses. The violence, melodrama and hard core action sequences will go well with the B and C centers. If the makers had reduced the dose of unnecessary family drama, the effect would have been even better. However, all those who like some realistic action flicks and don’t mind the Tamil flavour, they can give this film a shot.