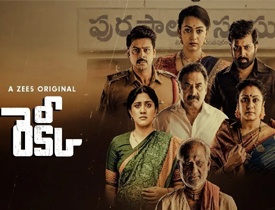 After scoring a decent hit with Gaalivaana, ZEE5 has released another new Telugu web series called Recce. Let’s check how it is.

Someone murders Tadipathri’s Chairman Varadarajulu (Aadukalam Naren) and the new SI Lenin (Sriram) is appointed to solve the case and arrest the culprits. He finds out clues and connects all the dots. Finally, he comes to know some shocking facts behind the brutal murder. Who killed Varadarajulu? How did Lenin solve the case? What is the reason behind the bighead’s murder? To know the answers you need to watch the series.

Crime thrillers are always gripping when the director narrates them in a good manner. In the case of Recce, the director deals with the story very well and the crisp screenplay is an add-on. The way he runs the series is so interesting. The twists and turns are so good.

Coming to performances, Sammeta Gandhi scored good marks and delivers a subtle performance as Paradesi. Sriram gives his best as a new SI who is enthusiastic to arrest the offenders behind the crime. Aadukalam Naren, Rajashree Nair, Thotapalli Madhu, and Ester Noronha justified their roles.

Though Recce has an interesting story and gripping screenplay, it failed to attract much because of poor casting. Siva Balaji’s role, which is a key character in the series, could have been designed in a good manner. He failed to justify the role with his poor performance. Besides, Dhanya Balakrishna’s role does not have much priority.

The 7-episode series could have been limited to 5 episodes easily. It seems that the director drags the story intentionally to extend the series for 2 more episodes. The last couple of episodes have so much lag and thus made audiences feel a bit bored.

Director Poluru Krishna makes Recce an interesting crime thriller series with his excellent narrative skills. The screenplay is the key aspect that makes one enjoy the series. Background music provided by Sriram Maddury is top-notch. He elevates many scenes with his score. Ram K Mahesh’s cinematography is also good. Editing by Kumar P Anil is fine and he could have trimmed some scenes in the last 2 episodes to make the series better.

On the whole, Recce is one of the finest political crime thrillers with some decent performances, and excellent background score. The series is enjoyable if you ignore some laggy scenes in the last couple of episodes.