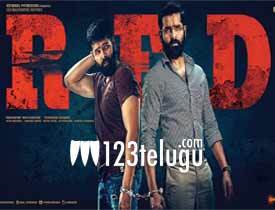 Red is a film that was delayed with its release due to the lockdown. The film has finally released during Sankranthi and let’s now see how the film is.

Ram plays dual roles of Aditya and Siddharth in Red. While Siddharth is an engineer by profession, Aditya is a crook. One fine day, a guy called Akash is killed and Siddharth gets arrested. The twist in the tale arises when Aditya also gets involved in the same case. Who has killed Akash? What is the whole flashback behind this muder? That forms the story?

As always, Ram does a superb job and in this film, he plays a double role. The variations in both the characters have nicely been showcased by the star hero. But, if you point out, he was good as Siddharth with his cool attitude and looks. Malavika Sharma looks pretty but she does not have much to do in the film.

Sampath is good as the cop and Vennela Kishore evokes some comedy in a few scenes. Comedian Satya is also good in his role. Posani was okay and so was the cop set up in the film.

The second half is tad better when compared to the first. The interval block, confusion in investigation has been nicely showcased in a few scenes. Nivetha Pethuraj is just about okay in her role.

One of the biggest drawbacks is that the film is not engaging. Right from the first scene, the film is showcased in a dull manner as there is no grip on the proceedings. The investigation looks silly as Nivetha’s role is weak and does not create any impact.

Apart from this, the length of the film is quite slow. The actual story kicks off only during the interval time. Hero has a girlfriend and the cops ignore her in their investigation and this looks silly. Also, there is no clarity why Nivetha helps the hero. There are so many such logics that go for a toss.

Coming to the director Kishore Tirumala, he has done a dull job with this thriller. His screenplay is weak and does not make the viewer sit with excitement to know who is the killer. He should have taken better actors as cops as the whole film is set in a police station and investigation is priority. But sadly, that does not happen.

On the whole, Red is a suspense thriller that works here and there. The story idea is good and Ram leads from the front with his impressive act. But the screenplay is weak, twists and narration are also jaded making this film a just an okay watch this weekend.