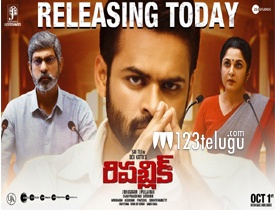 Republic is a film that many were waiting for as it is directed by Deva Katta. The film is out now and let’s see how it is.

Abhiram(Sai Tej) is a man who always questions the loopholes in the system. His dad(Jagapathi Babu) is also a government servant but is corrupt. Seeing all this happening around him, Abhiram takes up IAS and gets posted in his own hometown. But he has to deal with bigger issues and politicians like Vishaka Vani(Ramya Krishna). How will Abhiram manage such big heads and brings back normalcy in his hometown is the basic story?

The basic intention of the film is right and also addresses key issues in the system. The second half of the film is where most of the drama happens as the emotions and sincerity in the script are showcased well.

Ramya Krishna is apt in her role as a corrupt politician. Though she is brought quite late into the proceedings, she creates a decent impact. There is a confrontation scene between her and Tej and Ramya is magnificent with her dialogues.

Aishwarya Rajesh is decent but is getting typecast in supporting roles. Jagapathi Babu gets yet another crucial role and does well. Srikanth Iyengar is also neat. An action scene featuring Tej and the villagers has been showcased well.

Last but not the least, Republic showcases the acting prowess of Sai Tej. He is very good as a sincere IAS officer and brings out superb emotions. Tej does quite well in all the action and confrontation scenes with the likes of Ramya Krishna.

One of the biggest drawbacks of the film is the slow pace of the film. Such serious dramas need to be gripping from the first scene but that does not happen here. Sai Tej’s journey to becoming a collector is dragged for no reason.

Ramya Krishna is hardly there in the first half. In a way, so much time is taken to establish the conflict point. Also, the length of the film is a tad long and needs serious trimming.

A few cinematic liberties have been taken. Tej who plays a collector takes things way too much in hand and this aspect looks a bit odd. Also, Aishwarya Rajesh and her story do not create much impact in the film.

The music of the film is okay but the BGM was not that great. A more gripping score should have been used to elevate the confrontational scenes. Production values of the film are good as the lake visuals and countryside backdrop has been showcased well. Dialogues are impressive and so was the art design. The camera work of the film is just amazing.

Coming to the director Deva Katta, when compared to his previous films, Republic is a tad better. He has done a lot of homework and that is visible on the screen. His strength is drama and he elevates it well only in the latter part with a justifiable climax. If he would have made the first half crisp and narrated the proceedings in a gripping manner, things would have been effective.

On the whole, Republic is a relevant social drama with a realistic backdrop. Sai Tej’s sincere performance and good drama in the second half are basic assets. If you ignore the slow first half and lengthy runtime, this film can be given a shot for the sincerity in the making.