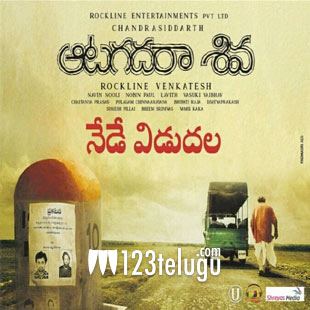 Aatagadharaa Siva raked up decent expectations, thanks to an impressive trailer that showcased “life and death” drama in a realistic manner. Let us check whether the movie can keep the audience engaged or not.

Aatagadharaa Siva revolves around the lives of 6 people and how their journeys are interlinked with each other. How did a prisoner(Udayshankar), who is sentenced to death, meet his executioner(Doddanna)? How did their journey cross paths with that of an eloped couple? During this crunch time, they also have to take a call on the life and death situation of two other individuals. What are the various emotions they go through? Watch the movie on the big screen to find out the answers.

The movie has a novel storyline that is rich in emotional content and real-life experiences. The director tries to keep things as realistic as possible and portrays the mentality of human beings who are being put through enormous pressure.

The lead cast has come up with great performances and especially Doddanna stands as the backbone of the film with his natural expressions and emotions. Hyper Adi tries to provide some comedy and impresses to an extent. Also, Gajula Udayshankar, who is making his debut with this movie is decent in the role of a stone-hearted prisoner.

The slow-paced narration is one of the first and foremost drawbacks for the film. The crisp story line has been messed up with way too many subplots that have no real connection with the story.

The second half is filled with too many heavy-hearted scenes as the excessive usage of “life and death” concept can get on to the nerves of the viewers. This destroys the flow of the movie, giving the movie an art film kind of a feel.

The director tries to rush up the ending part by stuffing the climax with emotions and that looks more like a desperate attempt to salvage the undercooked buildup scenes.

The director, Chandra Siddharth, picks a novel storyline that has enormous scope to narrate things in an interesting manner. However, he fails to give the core plot the treatment it deserves and that plays the spoiler part here.

The camera work is neat and a particular scene in the second half, that portrays the rural essence, has come out really well. The natural fire-light works are good to watch on the big screen. The dialogues written by Muni Suresh Pillai pack a decent punch and a few near-to-life experiences have been portrayed well. The background score is decent and adds a good punch to a few scenes in the second half.

On the whole, Aatagadharaa Siva is a suspense drama that portrays the journeys of different individuals who have their own set of problems. Even though the story line is good, the film needed a better treatment as the uneven screenplay and slow pace damage the flow. Decent performances from the lead cast and rustic visuals may impress a section of the audience but the film lacks proper conviction, making it a below par watch this week.