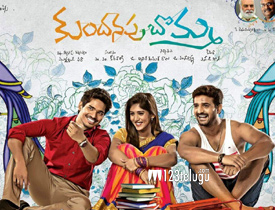 Continuing with the trend of low budget films, yet another romantic entertainer which has hit the screens this week is Kundanapu Bomma. Let’s see how this film turns out to be.

Suchi(Chandni Chowdary) is a happy go lucky girl from Vijayanagaram. Her father’s dream is to get her married to his close relative’s son Gopi(Sudhakar), who in turn is not interested in marrying Suchi.

As time passes by, Suchi falls in love with Vasu(Sudheer Varma) who comes to her house as a car mechanic.  Right when the couple decide to reveal their love story to their elders, Gopi changes track and agrees to marry Suchi.

What will Suchi do now ? What are Gopi’s actual intentions ? and how does Vasu clear this entire confusion ? That forms the rest of the story.

Heroine Chandni Chowdary is the sole attraction of the film. Even though she is quite new to films, she has done a decent job in her role. All her histrionics bring in some solace to this other wise outdated romantic family drama. Life is beautiful fame, Sudhakar Komala does an okay job in his negative role.

Sudheer Varma is just about okay in parts. Rajiv Kanakala is superb in his role and all his scenes with Chandni have been executed quite well. Nagineedu plays a mature character with aplomb. Some fun elements between the lead pair during the first half are good.

The basic plot of the film goes for a toss. There is not much clarity in the way the principal characters behave on screen. The way the hero is introduced as a car mechanic and his way of approaching the heroine’s family during his stay lacks conviction.

Jhansi’s character is so loud that it gives you an headache right away. Second half is bland and has some of the most silly scenes that you have seen in the recent past. Also, the way heroine’s parents react to her daughter’s affair and how they deal with it leaves a lot to be desired.

Except for Nagineedu’s character, there is absolutely no depth in emotions throughout the entire film. The climax is wrapped up in a hurry and also the way many characters behave during this time looks stupid.

After hearing the songs, you will be surprised to find out that legendary M M Keeravami has scored music for this film. The songs are so bland that none of them manage to impress. Camera work and production values are pretty good as the village set up and family atmosphere is designed well. Editing is okay and so are the dialogues.

Coming to the director Vara Mullapudi, he does an horrible job with the film. Right from his script to his narration, everything lacks conviction or clarity. The story line could have been good on paper but when you see it on celluloid, everything looks outdated.

Tollywood rarely gives second chances to film makers who disappoint with their first film. One should take things very seriously and grab the opportunity that has been given to them. But sadly, in this case director Vara Mullapudi misses out on many factors and makes this film a boring and outdated affair. Except for Chandni Cowdary’s lively character, this film has absolutely nothing to offer.