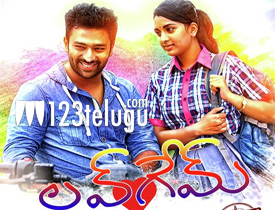 Shantanu Bhagyaraj’s latest Tamil film has been dubbed in Telugu with the title Love Game. Let’s see how the film turns out to be.

Charan(Shantanu Bhagyaraj) and Anusha(Shruthi Dange) are childhood friends who fall in love with each when they become adults. This affair of Anusha does not go well with her parents who send her off to higher studies. After a point in time, they fix her marriage with a big shot. Right when the wedding is set to happen, Charan suddenly kidnaps Anusha. Why did Charan kidnap Anusha? What is his motive? What happens to the couple? To know all these answers, we need to watch the film on the big screen.

One of the biggest plus points of the film is the lead pair’s performance. Shantanu Bhagyaraj is amazing as a sincere lover. His performance in the tense scenes is quite impressive. Shruthi Dange is the highlight of the film and she is quite good in her tailor-made role. Ravi Prakash who played the main villain was good in his given character.

The film starts on an interesting note and the scenes which lead to the main story have been established well. The interval twist has been dealt with very nicely. The manner in which the heroine’s backdrop has been revealed is also very good.

One of the biggest drawbacks is the manner in which the climax is ended. Things end on a hasty note which does not look impressive at all. Even though the story is old, the makers tried to present it in a new manner with a different screenplay which does not work at all.

Yet another minus point is that the film runs on a very serious note and this might not go well with a certain section of the audience. As the film has many Tamil actors, the selling point is also less for the film.

Triangular love stories like these have been dealt with in many films in recent times. There is nothing novel that the film showcases. Music by GV Prakash is decent and helps the film in a big way. His BGM is also very impressive. Camera work by Vivek is the biggest asset of the film. Production values of the film are pretty good. Editing is also neat and crisp.

On the whole, Love Game is a routine romantic drama which has nothing new to offer. The lead pair try hard to salvage the film with their performances but the film does not have the needed novelty and falls flat most of the time. As the film also has all new faces it is hard to work at the Tollywood box office.