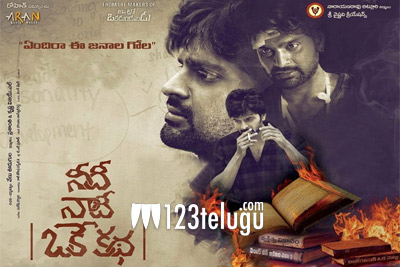 Hero Sree Vishnu is slowly but steadily making his presence felt in Tollywood by doing some very good movies. His latest film is Needi Nadi Oke Love Story. The film has hit the screens and let’s see how it is.

Sagar(Sree Vishnu) is a very normal and simple looking middle-class guy who is struggling hard to complete his graduation. His father is a school teacher and always nags him to settle down in life. But Sagar clearly knows his capabilities and wants to discontinue his studies. Rest of the story is as to how Sagar convinces his dad and ends up doing what he is comfortable and likes in his life.

One of the biggest assets of the film is the emotional content. The film is filled with realistic and moving emotions. The father and son relationship is showcased in a superb way and many students and parents can easily identify with this thread.

Yet another major asset of the film is undoubtedly Sree Vishnu. The way the young hero performed his role as an underdog and a confused guy showcase volumes of his talent. He is excellent in all the emotional scenes with his father and they form the major highlight of the film.

The second half is a major plus for the film and this is the time where all the family emotions connect quite strongly with the audience. Director Devi Sri Prasad who played the father’s role is a super find as he has done a wonderful job in his role. The middle class set up and what all problems do below average students undergo has been showcased in a very realistic manner.

The storyline of the film is very bleak as there is no major conflict point which hits you hard. Sree Vishnu’s Chittor slang has been overdone a bit in the first half as it looks odd at times. The film tends to get slow at times as the same emotions are repeated time and again in certain scenes.

Also, hero’s character does not have much clarity and what he wants to do in life has not been showcased in a convincing manner. Some scenes as to how the hero settles in life should have been executed properly.

Even though the film has been made on a budget of under one crore the movie looks top class. Every frame of the middle class set up has been showcased superbly by the camerawork. Dialogues are quite meaningful and have been written with a lot of pain. Editing is perfect as the film is just two hours long. Music is pretty decent and the way the songs are shot in a montage kind of a manner is very good.

Coming to the director Venu Udugula, he makes an impressive debut with this film. He chooses a very contemporary subject and narrates it in a very relatable manner which everyone can justify with. His hold on the emotions is very good and the manner in which he brings out performances from his star cast is quite brilliant.

On the whole, Needi Nadi Oke Katha is an emotional family drama which every student and parent can relate to. The burning problem of how the parents pressurize their kids to settle down in life has been showcased in a very realistic manner. Sree Vishnu’s moving performance and the realistic setting in the film will be liked by the family audience. If you ignore the slow pace and predictable storyline, this film ends up as an interesting watch this weekend.