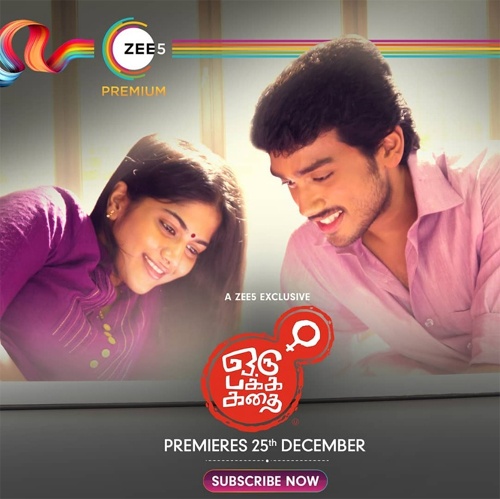 So, continuing the series of reviewing movies and shows on OTT, our today’s pick is Oru Pakka Kathai, the latest Tamil film on Zee 5. Let’s now see how it is.

Saravanan(Kalidas Jayaram) and Meera(Megha Akash) are a couple in college who want to take their relationship to the next level. The couple’s parents are happy and are waiting for the right time to get married. But things change as Meera finds out that she is pregnant. Things change upside down as the couple has not had a physical relationship at all. Then, how is Meera pregnant? and how does this young couple solves this big issue is the whole story.

This film was stuck and was in the making since 2014. So, the lead actors look quite young but give a good performance. Megha Akash is the show-stealer as the girl who is pregnant without her knowledge. She holds the emotions well and carries her intense role convincingly. Kalidas has transformed into a top actor and that was proved with Paava Kathaigal recently. He too does well in his role and looks a bit rustic in a few scenes.

The production values, music, and supporting cast are top-notch especially Meena Vemuri and Lakshmi Priya Menon. The scientific reasons that are given to the problem also look apt. The film starts off on a good note and the conflict point is also established well. The serious problem is narrated in a decent manner by the director Balaji Tharaneetharan as he addressed the issue in an impressive manner in the first half.

The conflict point is good and it establishes well. But what comes after the baby is born is a bit of chaos. Too many superstitions, a godman entering the scene and taking ownership of the baby, such things derail the film. The pace of the film also drops down and a separate track of a small girl also sidetracks the film.

The ending is decent but for that, the audience needs to sit through the dull second half which spoils the fun. Though the story idea and taking are novel at the beginning, its narration and family drama is routine and dull in the end. The production design is not that great and so was the editing.

On the whole, Oru Pakka Kathai is a Tamil family drama that has a very unique premise. It starts off on a good note and holds the attention until the halfway mark quite well. But from there, too many forced emotions and subplots spoil the narration and make this film just an okay watch. Give it a shot for its different storyline.