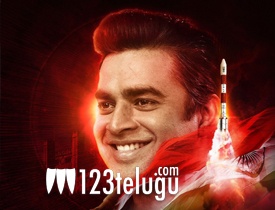 Rocketry- The Nambi effect is star hero, Madhavan’s dream project for a long time. The film is a biopic of Nambi Narayanan, a former scientist and aerospace engineer of ISRO. The film is out today and let’s see how it is.

Rocketry is about the famous Indian scientist Nambiar Narayanan. Madhavan plays the role of Nambiar and the film is set in two zones. While the first half shows, Nambi Narayanan’s growth as a scientist, the second half is filled with phases of how the renowned scientist was charged with leaking sensitive information related to India’s space developments. The rest of the film is about how the scientist gets arrested by the CBI and fights his case alone and finally comes out with a clean chit.

Undoubtedly, Madhavan is the life and soul of the film. He has turned director with this film and has given his best work to date. After doing so many commercial films, Madhavan superbly transforms into Nambi Narayanan and surprises the audience with his look and body language.

Simran plays a key role and she is one of the surprise packages of the film. Her emotional outburst, look, and the way she emotes in key scenes bring a lot of depth to the film. The film’s casting is done right as the supporting cast has a proper purpose in the film.

Superstar Suriya plays a cameo and he brings a lot of depth to the film in the end. Lastly, the great man, Nambi Narayanan himself played a small role in the end and was very good acting-wise. The investigation scenes and how the scientist faced insults have been executed well by the Madhavan.

The film is a biopic and is a serious subject. So, all those who look for commercial stuff should stay away from this film. As the film is about an aeronautical engineer, more emphasis should have been given by director Madhavan to explain the concept in more detail during the first half. The pace of the film is also quite slow in the first half and has a docu-drama kind of a feel.

Madhavan has made sure that his film is high when it comes to technical aspects. Camerawork by Sirsha Ray is top-notch and showcases the period drama in a stunning manner. The production values are amazing and BGM by Sam CS is also gripping and elevates a lot of scenes in the second half. The Telugu dubbing and dialogues are decent.

Coming to the actor-director Madhavan has done a good job with the film. He has taken a core aspect of the scientist’s life and narrated it in a decent manner. Had he worked on the first half in an even better manner, the viewing experience would have been even better. But as a first-time director, Madhavan scores good points.

On the whole, Rocketry-The Nambi Effect is an emotional drama about how one of India’s famous scientists went through turmoil after being called a traitor. Madhavan’s one-man show and gripping second half are major assets of this film. If you ignore the slow pace in the first half, this film is decent and can be given a shot for its honest making.