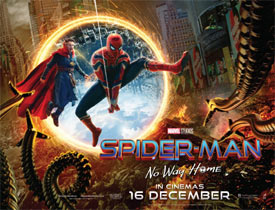 Spider-Man: No Way Home is the latest outing from the insanely popular Spider-Man franchise. The film hit the silver screens today amidst sky high buzz. Here is our review of it.

Peter Parker aka Spider-Man(Tom Holland) and Dr. Strange (Benedict Cumberbatch) accidentally open up a multiverse portal. Consequently, the former lands in big trouble as the enemies of Spider-Man supposedly from other dimensions enter earth and they are after him. Can the Spider-Man tackle the situation? If yes, then how?

The best thing about Spider-Man: No Way Home is the largely effective fan-pleasing moments. The followers of the Spider-Man franchise are in for a fair few goosebump-inducing elevation blocks spread evenly through the course of the latter half. Especially, the scenes pertaining to Spider-Men from multiple universes will enthrall the fans.

The emotion connect is bang on point in this edition. The bonding between the central characters is showcased in a novel manner. The Aunt May track is executed well. The tough decision Spider-Man has to make towards the end packs the desired emotional value.

Tom Holland, Zendaya, and the rest of the lead cast come up with spotless performances and they shoulder the film.

All of the recent films from the Spider-Man franchise have been revolving around the concept of multiverse and the latest outing is no exception. The film is based on multiverse, a concept that isn’t all that convincing. The first-time viewers might find this concept confusing and childish.

There are handful of popular supervillains in the film but their characters aren’t all that novel. We don’t get a sense of menace or spine-chilling element that we usually see in the previous editions of Spider-Man.

The director Jon Watts uses the concept of multiverse to fuel the narrative and he does manage to narrate the story without too many hiccups in the course of the film. The proceedings are paced well. The background score is of very good quality. Cinematography is top notch. The VFX and CGI are of Marvel’s usual best standards.

Spider-Man: No Way Home mainly banks on the fan-pleasing elevation blocks and it has a fair few of them, which helps the cause. But the lack of a strong antagonist track is bummer. That said, the film has enough engaging blocks that keep the audience on the edge of their seats.