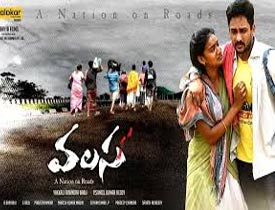 Sunil Kumar Reddy is known to make some hard-hitting films in his career. Next in line is a small budget film called Valasa. The film is out now in theatres and let’s sees how it is.

The story is based in the lockdown period and is about a couple, Rajinikanth(Manoj Nandan) and Savitri(Gauri). We all knew how many daily wage employees waited to go to their native places and crossed the borders. In such a time, how the above-said couple faced issues forms the story of this film.

Sunil Kumar Reddy is known to showcase the realities of life in a harsh manner and he does the same in this film. The problems of lockdown and how life came to a standstill is showcased so nicely in the film.

More than anything the problems that the couple face along with other people, all this has been showcased emotionally. Manoj Nandan does well in his role. Also, the actor who played the pregnant lady emotes quite well.

Vinay Mahadev, Gauri, and the rest of the cast have done well. Also, the lead actress Savitri has done a neat job in her character. The interval bang is good.

Though the story is good, the treatment of the film is not proper. In many scenes, some emotions look forced and do not have serious narration. The narration also looks jaded after a point and does not have the needed grip.

There are some scenes that lack logic in the film. Too many subplots and stories of the people facing issues create a disturbance in the film after a point.

The camerawork of the film is not that great as many scenes look rushed. The editing is dull and so was the whole production design. Because of this, the production values of the film go for a toss.

Coming to the director, Sunil Kumar Reddy, he has done just an okay job. Though he starts the film well, later on, things become repetitive and bore the audience.

On the whole, Valasa has a good setup and contemporary backdrop of lockdown. The emotions and performances work to an extent but an uneven execution and dull narration makes this film a dull watch in the end.