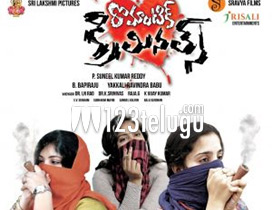 Noted director, Sunil Kumar Reddy has come up with yet another crazy film titled Romantic Criminals. The film has hit the screens today. Let’s check how it is.

Romantic Criminals mainly showcases the effects of drug mafia on today’s college-going youth. Habituated to drugs, a young couple, Karthik and Angel commit various crimes in Vizag with the help of a drug peddler. One fine day, they decide to stop all the crimes and settle down in life. Will they be able to come out of the crime world easily? What kind of hurdles will they face? To know this, you have to watch the film on the silver screen.

Young artists, Karthik and Avanthika, who played the lead roles in the film are decent and have a good screen presence. Their performance in a few emotional scenes was good. One romantic song featuring them will attract the youth because of the glamor quotient.

The root cause for the explosion of drug mafia in the city and what reasons make children get attracted to drugs is showcased nicely. Other artists like Vinay and Divya are decent in the supporting roles.

This movie also deals with a good social concept but lacks an engaging narration. This is the biggest drawback as many scenes are not properly executed and look forced.

Too many threads of various people joining the drug mafia get tedious and certain links in the mafia setup are not elaborated properly. Adding to it, the slow paced narration and the unengaging screenplay is an added blunder for the film.

Senior director Sunil Kumar Reddy’s idea of exposing drug mafia is good but he miserably failed in narrating it with some interesting proceedings. If he would have focused on the execution part, the result would have been even better. Editing work is not up to the mark as the film seriously needs a re-edit to avoid unwanted scenes.

The cinematography is bad as the film’s quality is worse than a short film. Music by Sudhakar Mario is just about okay. Production values for this low budget film are adequate.

On the whole, Romantic Criminals is a boring and unconvincing crime drama which does not work in many aspects. Though the film highlights the effect of drugs on today’s youth, it is not narrated in a convincing manner. Except for a few romantic scenes between the lead pair, this film has absolutely nothing new to offer. So, skip the film this weekend and look for better options.