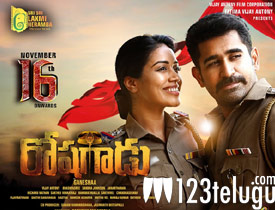 Vijay Antony, who is continuously dubbing his films in Telugu has come up with yet another film titled Roshagadu. Touted as an intense cop drama, the film has hit the screens today. Let’s check how it is.

Kumara Swami (Vijay Antony) is a sincere and duty-minded cop who grows step by step and gets promoted as an Inspector. Soon after taking charge, Kumara Swami notices that the youth and general public in his area are being influenced by a goon called Babji (Dheena). How Kumara Swami deals with the goon and brings a change in the society forms the rest of the story.

Vijay Antony’s acting can be termed as the biggest plus points of the film. His settled performance as a responsible cop role brings depth to the proceedings to an extent.

Dheena as the main antagonist is perfect and delivered an impressive performance. His getup and rugged look as a criminally minded goon are apt for the film. Telugu dubbing for his role is good and elevates a few crucial scenes nicely.

Heroine Nivetha Pethuraj is glamorous in her cop avatar and she did a decent job in her limited screen presence. An intense confrontation scene between the hero and villain during the interval block is nice and sets a perfect stage for the latter half.

Like all Vijay Antony films, this film also struggles with the slow pace narration. Though the core point is decent and has enough scope for commercial elements, the director failed to deal with the proceedings in an interesting manner.

After the first fifteen minutes, the audience comes to know that this film is going to be all about a fight between a cop and a deadly goon. The film has a lot of Tamil flavor which may not go well with our Telugu audience.

Till interval, there is nothing much except for a few preaching scenes from the protagonist which also look jaded after a while.

Director Ganesh’s idea of making a commercial film by picking up a successful Police-Rowdy face-off is nice but he failed to speed up the proceedings with a gripping screenplay. Editing is not up to the mark as the run time of the film could have been easily trimmed up to fifteen minutes to make the proceedings crisp. The cinematography is decent and suits the film’s genre. Music is a big disappointment as neither the songs or the background score uplift the film. Production values for this limited budget film are okay.

On the whole, Roshagadu is a routine cop drama which has a strict few impressive scenes. The interval block and last ten minutes of the film where the hero brings a change in the society are handled well. But on the flip side, the slow pace narration and lack of entertainment dilute the proceedings and making it a dull fare this weekend.