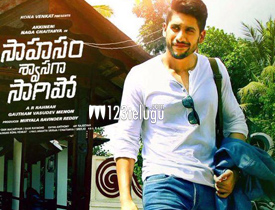 Naga Chaitanya is in the best phase of his career. After the super success of his last film Premam, he is back with yet another interesting project Sahasam Swasaga Sagipo. Directed by Gautam Menon, this film has hit the screens today. Let’s see how it is.

Chinna(Chaitanya) is a college going youth who falls in love with Leela(Manjima Mohan), his sister’s best friend. As time passes by, he gets close to Leela and takes her for a long road trip.

The twist in the tale arises when the beautiful road trip changes upside down because of a horrible accident. Thereafter, things become even more difficult for the couple as a dreaded gang starts attacking them.

Who are these people ? What do they have to do with such a young couple ? and how will Naga Chaitanya save his girl friend from this chaos. That forms the rest of the story.

Sahasam Swasaga Sagipo completely belongs to Chay. The young hero has lost all his inhibitions and has become super confident in his approach towards his performances. Chaitu nails it as the lover boy during the first half and springs a surprise with his serious tone and thrilling performance during the second half.

Manjima Mohan makes a decent debut and suits her role well. Undoubtedly, A R Rahman is yet another highlight of this film. Both his music and background score elevate the film to another level.

Baba Sehgal is lethal in his performance and gives the film an edge. While the first half of the film is quite breezy the second half turns quite serious and thrilling till the pre-climax.

The climax of the film is quite disappointing. Even though the way Gautam Menon wraps up things is okay, they look quite unbelievable and over the top from the outside. The way Chay’s character springs a surprise during the end is outright silly.

The film had scope for more romance but Gautam narrated the film in his own sweet time and with many songs coming in as speed breakers. The placement of these songs is also wrong.

All those who seek superb romance and entertainment during the second half will get disappointed a bit.

As said earlier, music by A R Rahman is very good and holds the film together. Production values are good and credit should go to the cameraman for showcasing the simple proceedings in an interesting way. Editing is sleek and so were the dialogues.

Coming to the director Gautam Menon, he has done a decent job with the film. He has tried many new things in terms of narration. Some work well but there are certainly other factors like the back to back songs which can go against the film. Had he handled the climax in a better way, the outcome would have been even better.

On the whole, Sahasam Swasaga Sagipo has some very interesting moments throughout and will impress the younger generation. But the lack luster and silly climax can disappoint  many. However, this film ends up as an okay watch only because of Naga Chaitanya who gives a superb performance and holds the film together.