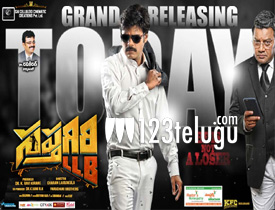 Saptagiri LLB is one film which has been promoted quite heavily all over. The film which is an official remake of Jolly LLB has hit the screens today. Let’s see how it is.

Saptagiri LLB(Saptagiri) is a small-time lawyer who comes to Hyderabad to make it big as an advocate. In order to become quite famous, he challenges one of the top lawyers(Sai Kumar) of the country in a hit and run case. Rest of the story is as to what kind of problems does a small-time lawyer like Saptagiri goes through to win the case.

The last half an hour of the film is quite crucial and is the biggest asset to the film. The way the court case is fought between the two lawyers has been showcased in a very interesting note.

Sai Kumar does a pretty impressive job in his role as a senior lawyer. He brings a lot of depth to the proceedings with his negative role. All his confrontational scenes with Saptagiri has been executed nicely.

Coming to Saptagiri, he has done a decent job in his titular role. Even though he goes overboard at the start of the film, once the second half begins, he becomes serious and gives a settled performance. The actor who did the role of a judge has also done a very impressive job.

The entire first half is dodgy and has nothing much interesting going its way. The way Saptagiri gets involved in the case and challenges Sai Kumar is shown in a very silly note.

This is the time where Saptagiri is shown as a mass hero with unnecessary fights and songs coming in as speed breakers. The makers should have left Saptagiri’s character quite simple and plain-hearted so that things would have been quite hard-hitting during the end.

Yet another drawback of the film is that the court case gets serious only in the second half and all the scenes showcasing Sai Kumar and Saptagiri’s arguments during the first part have no weight. The film clearly does not have the emotion or depth which the original Hindi film created.

Production values of the film are pretty neat and showcase the film in a rich light. The art direction is pretty good as the courtroom set up and its surroundings have been showcased in a realistic way. The camera work is captivating and so was the background score. The screenplay of the film is quite disappointing as the main plot does not create any impact until the last half an hour. Coming to the director Charan, he has done a below average job with the film. He wastes a lot of time to get to the point and makes the premise silly most of the time.

On the whole, Saptagiri LLB is a half-hearted remake of the cult Hindi film Jolly LLB. The first half of the film goes for a toss as some silly narration and over the top sequences bore the audience. Things become interesting only during the last half an hour as the emotions, performances, and hard-hitting courtroom scenes elevate the proceedings and make this a bearable film this weekend. Watch it only for the second half.