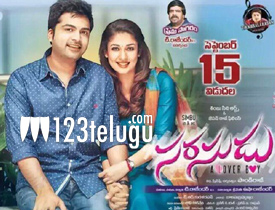 Continuing the trend of dubbing films, yet another Tamil film which has come to us in Telugu is Sarasudu. Starring Nayanthara and Simbhu, this film has hit the screens today. Let’s see how it is.

Shiva(Simbu) is an easy going software engineer who always ends up breaking up with all his lovers. Upset with this, he agrees to tie the knot with the girl(Nayanthara) whom his parents select. A small love story kick starts and the couple happily gets ready for marriage. The twist in the tale arises with the entry of Priya(Andrea). Things become worse between the couple as the marriage is called off. Who is this Priya? What does she have to do with the couple? and how does Shiva manage to win his love back? That forms the rest of the story.

One of the biggest assets of the film is the simple and feel good love track between Simbu and Nayanthara. The way an engaged pair lead their romantic life has been showcased quite well. Nayanthara gives a memorable performance once again. She is a pro at such roles and once again shines in Sarasudu.

Simbu does well as a soft guy. He looks decent and carries the film on his shoulders. Andrea does what is expected of her in a supporting role and she shines too. Satyam Rajesh elevates good humor as hero’s friend.

The film’s story line is quite routine and old as there is nothing new that has been showcased. Films like these have come a number of times in the past. Even though the director narrates the point in a simple and straight manner, there is nothing much exciting to talk about the proceedings.

The makers tried to infuse much comedy here and there but things do not click at all. Star comedian, Santhanam has been underutilized in the film as his role does not evoke any laughs. The heavy Tamil flavor will not be liked by the Telugu audience at all.

Production values by T Rajender are quite good as the film looks neat. Director Pandiaraj fails in his execution as he did not show anything new in his narration. The same old storyline, outdated narration, and simple proceedings make his directional capabilities quite weak. Camera work is superb as it showcases the film in a splendid manner. Editing is just about okay and so was the music and background score.

On the whole, Sarasudu is one movie which has the story and set up of a short film. The only saving grace of the film are the energetic performances by Nayanthara and Simbu. Though the film is not entirely a boring watch, the proceedings are quite outdated and have nothing interesting to offer. Go in well prepared and don’t get fooled by the title as there is no such romance that will keep you excited.