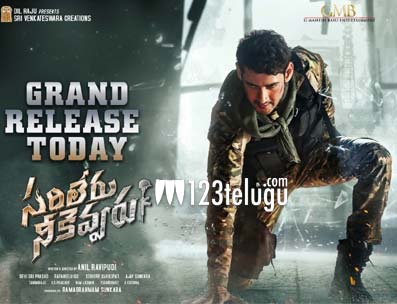 Sankranthi season has well and truly arrived as Mahesh Babu’s Sarileru Neekevvaru has hit the screen today. Let’s see whether it lives up to all the hype or not.

Ajay (Mahesh Babu) is a daring military officer who works for the Indian army. On the other hand, Bharati (Vijayashanti) is a sincere professor in the city of Kurnool. She gets into a problem with a local minister played by Prakash Raj who plans to kill her. Right when she and her family are going to be killed, Ajay lands in Kurnool and saves her. Who is this Bharathi? What is her connection with Ajay? To know that, you have to watch the film on the big screen.

Undoubtedly, Sarileru Neekevvaru is Mahesh Babu’s show all the way. The star hero is just magnanimous in his role which has different variations. Mahesh has showcased mass, class and action avatars in a superb manner and will please his fans in a big way. His comedy timing is too good and Mahesh has danced supremely well in the ‘Mind Block’ song which will be a treat for the audience. His chemistry with Rashmika is also very good and they look good as a couple.

Rashmika is perfect in her funny role and evokes good comedy with her facial expressions and body language. It was good to see Sangeetha in a good role after a long time. Rajendra Prasad plays a neat supporting role. Rao Ramesh, Murali Sharma, and Ajay play their key roles well. The so-called train episode lives up to all the hype and provides good entertainment for the audience. Bandla Ganesh evokes a few laughs.

Vijayashanti makes a solid comeback and is very good in her key role. She brings a lot of depth to the film with her screen presence and does well. Her dialogue delivery is powerful and she shares very good chemistry with Mahesh Babu in the film. As expected, Prakash Raj does well in his villain’s role and also evokes fun with his satires.

The first half is quite entertaining as it has a good mix of comedy, patriotism, fights and solid interval bang. The basic asset of the film is that fun has been generated at regular intervals keeping the audience engaged. DSP’s music is yet another key asset as all the songs sound even better on-screen and have been placed superbly.

The storyline of the film is the weakest link as it does not provide any novelty. Also, there are not many twists and turns which makes the proceedings predictable. The second half gets bogged down when compared to the first part as it has some routine hero-villain scenes between Prakash Raj and Mahesh Babu.

The climax is also a bit dull and looks slightly over the top. There will be a mixed reaction for the ending as some will like it and the others might find it silly. After a very good first fifteen minutes in the second half, the tempo of the film drops down as routine fights and scenes come in. Looks like director Anil Ravipudi ran out of ideas during this time as the heroism and confrontation scenes between Prakash Raj and Mahesh have already been used up in the first half itself.

As said earlier, music and BGM by Devi are solid as he is a major advantage to the film. Production values by Anil Sunkara are top-notch as the film looks rich in every frame. Credit should go to art director Prakash for his superb sets. Kurnool’s famous Konda Reddy Buruju looks amazing and all the scenes shot in this backdrop are superb. Shekhar master’s choreography for two songs is just amazing and especially for the Mind Block song.

Dialogues are superb as Anil Ravipudi has given some crazy one-liners and also good mass punches. The screenplay is superb in the first half as the story is established nicely along with good fun. But it gets bogged down a bit in the second half. Some more racy episodes would have made the film even tighter. Lyrics are very good and so was the styling done for Mahesh Babu.

Coming to the director Anil Ravipudi, he has done a very good job with the film. He plays to Mahesh Babu’s strengths and showcases him in a superb manner extracting good variations. Keeping the emotional content intact, Anil has evoked neat comedy at regular intervals. In a way, we can say that he has packaged the film in a very clever manner with the right dose of entertainment and catered to every section of the audience. If he had made the latter part of the second half and climax a bit more convincing, things would have been even better.

On the whole, Sarileru Neekevvaru is a well-packaged Sankranthi treat that has good entertainment narrated at regular intervals. The film is Mahesh Babu’s one-man show and the added advantage are the hit songs, mass fights, and good comedy. Though the second half gets slightly bogged down with a weak climax, the film is a feast for the fans and masses. It will rake in good collections and would be loved during this festival time as it has something for everyone. Go watch and enjoy Mahesh’s mass treat.